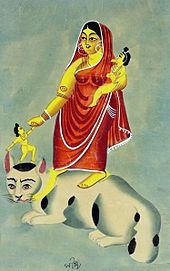 INTRODUCTION
Shashti is a Hindu goddess, and considered as the protector of children. She is also worshipped by the people as “SANTHANA LAKSHMI”. And in chennai, Besant Nagar, Ashta Lakshmi Temple, a separate shrine is dedicated for Santhana Lakshmi. By worshipping her and doing abhishekham and archanai to her, we will get the blessings of Goddess Shashti, since both of them are considered as one and the same. She also helps for safe pregnancy and assists the mother through her spiritual powers during childbirth. She usually appears as a divine mother, with a cat as her vehicle and surrounded by infants. She is also worshipped in the form of a banyan tree or in the form of a holy stone. The worship of Shashti is mainly done by the pregnant ladies. Women without issues will worship Shashti and ask the boon for conceiving good children. She is mainly worshipped in eastern parts of India. Annual Chhath Puha is celebrated in Bihar in order to honour her and Lord Surya.
She is mentioned in several holy hindu texts and worshipped from 9th century BC onwards. She is also worshipped along with the hindu god Skanda. She is also believed to be the goddess Devasena, the consort of Lord Skanda. She is treated as a holy goddess, who acts as a saviour and protector of children.
Her complexion is golden colour and contains a good appearance, wearing garments and jewellery with a child lying in her lap. And with her vehicle cat, she travels all around the earth and safeguards all the pregnant women for getting safe delivery of children.
Shashti is also related with Lakshmi, the consort of Lord Vishnu. And she contains the features of all the tridevis, Shakti, Lakshmi and Saraswati. According to ancient texts, she is considered as the daughter of Lord Brahma. She is also described in Mahabharata and in Buddhist texts.
In Bengal, people believe that Shashti is a close associate of Manasa Devi, the snake goddess. She is also worshipped during the Naga Panchami festival. In Orissa, the goddess is worshipped by the people as the divine mother and the giver of good children, and also believes that she protects them throughout their life.
IMPORTANCE
Though she is considered as a goddess for child birth, she also can be worshipped for all other matters. She also removes the illness, miseries and sorrows, mental confusion, lapse of memory, bad luck, sins committed in past births and gives good prospects in our life. By providing food to the animals, and especially cats, she will be immensely satisfied, and offer all sorts of benefits to us. We can recite her slokas and chant her various names and get relieved from problems and can attain spiritual enlightenment.