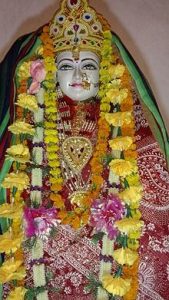 INTRODUCTION
Sheetala Devi is worshiped in many parts of india and also in Nepal, Bangladesh and Pakistan. She is an incarnation of Goddess Durga, and she cures poxes, and all other dreaded diseases.Once a demon named Jwarasur, started spreading incurable diseases to all the people in the earth, especially among the children. Durga assumed the form of Sheetala Devi, and with her great power, she cured all the people’s diseases.Lord Bhairav and Durga Mata fought with Jwarasur and killed him with their powerful weapons. They have destroyed the demon, in order to prevent the sufferings of the people, and to make them to live a healthy and peaceful life.

She not only cures the diseases of the people, but also gives all the prosperity in our life. She is the divine mother who protects the entire universe through her magnificent power.
Let us worship her and be blessed.
“OM SREE SHEETALA DEVIYE NAMAHA”
WRITTEN BY
R.HARISHANKAR