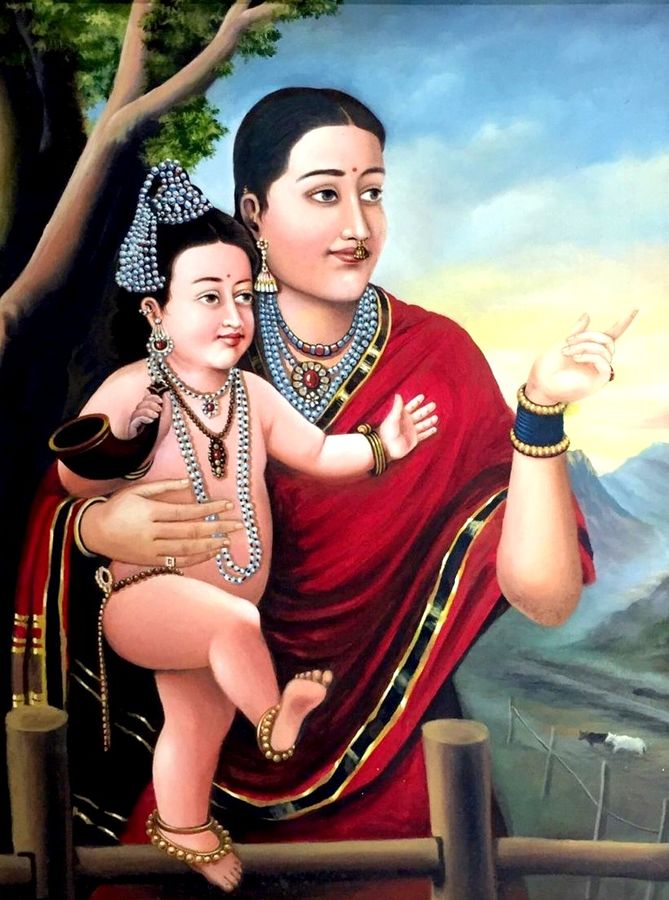 INTRODUCTION
Yashoda is the foster-mother of Lord Krishna and the wife of Nandagopal. She is mentioned in ancient Hindu texts. According to Bhagavata Purana, Krishna was born to Devaki, but he was brought by his father Vasudeva to Gokulam, due to the evil act of Kamsa, and raised by Yashoda and Nandagopal.
Yashoda is a kind hearted woman who has brought up Lord Krishna in a good manner. She also treated her neighbour’s children as her own children, and showed love and affection on each and every one.
She got the opportunity to see the childhood plays and miracles of Lord Krishna, and got mesmerised through his playful acts.   Yashoda has done many good karmic deeds in her previous births, and hence she got Krishna as her lovely son.
She also praised for her great love and affection she had with Lord Krishna.
Yasoda also played an important role in raising Balarama (the son of Rohini) and sister Subhadra.
She also gave birth to Yoga Maya, but when Kamsa tried to kill Yogamaya, she assumed her real form and stayed in Vindhya hills as Vindhyavasini Devi.
She has taken birth as Vakula Devi, the foster mother of Lord Venkateswara in this Kali Yuga.
Let us worship the holy mother and be blessed.
“OM SRI YASHODA ANNAIYE NAMAHA”
“JAI KRISHNA”
WRITTEN BY
R.HARISHANKAR