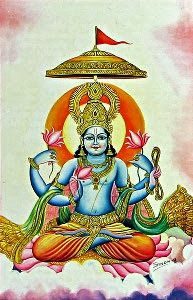 INTRODUCTION
Sky God called as Dyaus Pitr in Sanskrit is the vedic deity of Hinduism. He is considered as one among the eight vasus, the divine attendants of Lord Indra. He is also called as “AKASH RAJ”. His vehicle is cow. He is the god of heaven and the god of sky. He controls the clouds in the sky and welcomes the saintly people to the heaven, and will also show their place and position in the heaven. He is a close friend of Lord Indra, and both of them work together in discharging their duties. His importance is mentioned in Rig Veda, and several hymns are dedicated to him. He is also worshipped by the people in some foreign countries.
He also supports and maintains friendly relations with the gods and goddess like the earth goddess, vayu, varuna, surya and chandra. He is the father of dawn goddess ushas. In Europe, he is worshipped as the god of heaven and sky. He is mentioned in vedas and other sacred texts, and receives the sacrificial offerings of the yagna, similar to other demi gods like indra, varuna, agni and vayu, and blesses us.
He delivers messages in the sky, and informs about the future happenings. During the dwapara yuga, kamsa was informed that Lord Krishna was born in yadava community and he is going to kill him. This was announced by the sky god. He contains a divine appearance with golden coloured body and a bright and charming face. He got four hands and blesses us in his right hand. He also helps the people travelling in the sky through plane, helicopter or space craft and helps them to make their journey safely in the sky.
He also contains the powers similar to that of other vedic deities like Varuna, Indra, Vayu, Agni and Surya, and moves with them in a friendly manner. He consults with Indra and discharges his duties and responsibilities in a proper manner. He is also the devotee of Lord Vishnu and frequently utters his name. He removes the miseries and sorrows of the people and post pone the death and gives a long life to the people, and also helps them in leading a healthy, wealthy and a happy life.