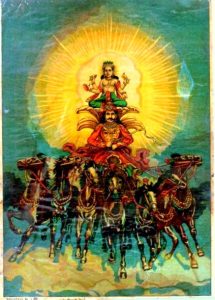 INTRODUCTION
Aruna is the charioteer of Surya (The Sun god) in Hinduism. He is the son of Rishi Kashyapa and Vinata. He is the older brother of Lord Garuda. His wife name is Mata Syeni.
One famous temple dedicated to Lord Aruna is situated in Thailand. He got shining face and glitters like that of the sun god. And he also contains the features of the sun god. Hence sun god appointed him as his charioteer. He tirelessly rides the chariot as per the instructions given by the sun god, and never takes any break, and is performing his daily activities from several millions of years ago and is still doing his duties in a remarkable manner.
IMPORTANCE
Similar to his brother, Garuda, who was the vehicle for Lord Vishnu, Aruna works under the sun god. Lord Surya is also considered as an incarnation of Lord Vishnu, and called as “SURYA NARAYANAN” and worshipped by the people as Lord Vishnu himself. Aruna contains great powers from his childhood itself. After performing severe penance, he got the position of becoming a great charioteer of Lord Surya.
He is worshipped by the people along with the sun god. The sun god will be very much satisfied, if we worship his charioteer Lord Aruna, and praise his glories. It is believed, that whatever puja performed to the sun god, will reach his charioteer Aruna also, since he occupies a major role with the sun god, and forms part and parcel of his life. He helps the sun god in performing his duties properly. Without the help of the sun god, the entire universe will get shattered. And since, Lord Aruna is helping the sun god in performing his daily duties we have to compulsorily worship him as equivalent to that of Lord Surya.
By worshipping Lord Aruna, we will get relieved from several skin related problems, leprosy and all sorts of dreaded diseases and will be relieved from mental problems in our life. And our life will also sparkle, with the blessings of Lord Surya and Aruna.

Let us worship the great god “ARUNA” and be blessed.