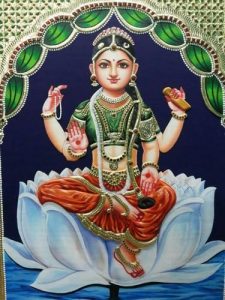 INTRODUCTION
Ashokasundari also called as Bala Tiripura Sundari is a Hindu goddess and the daughter of Shiva and Parvati. And she is the sister of Lord Vinayaka and Murugan. Her details were mentioned in the ancient puranas. The goddess is mostly worshipped by the Sakthi Devotees. Her husband is Nahusha. And her son is Yayati.Ashokasundari was created from the wish-fulfilling tree Kalpavriksha due to Parvati’s favour. She was a beautiful girl and contains the powers, similar to that of GoddessParvati.

Ashokasundari looks very attractive and contains charming face, and looks in the form of an adolescent child.Once she was abducted by the Demon Hunda in order to marry her, and later she was escaped from him.The great king Nahusha fought with the demon Hunda, and defeated him after a fierce battle and married her. For some time he occupied the throne of Lord Indra and ruled the heaven in a well versed manner. Their son’s name is Yayati, and he is also a great warrior and a noble man, similar to that of his father Nahusha. Both Nahusha and his son Yayati are learned scholars and mastered in all kinds of art, and contain spiritual powers.
IMPORTANCE
Bala Tiripura Sundari was worshipped all over India. She protects her devotees from misfortunes and gives them a bright future. She removes the illness and sorrows from the life of her devotees, and gives good prospects in their life. Several mantras are attributed to her. And lot of temples are dedicated to her.It is advisable to worship her in order to get relieved from our sins, from various mental and physical diseases, to live a happy life and also to get SALVATION.

She is worshipped by several saints and holy persons and got benefitted from her. She is worshipped mainly with flowers, and doing abhishekham to her idol will also yield good results in our life.Since she is an incarnation of Goddess parvati, worshipping her is equivalent to that of worshipping goddess parvati.It is advisable to visit her temples, and to get good results in our life.Adi sankaracharya worshipped Bala Tiripura Sundari and recited several slokams in praise of her.Childless couples are advisable to pray goddess tiripura sundari, and to worship her with sincere devotion in order to get the boon of child birth to them.