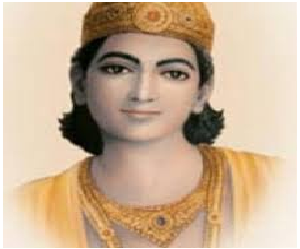 Bhanu was the son of Lord Shri Krishna and Mata Satyabhama, and he closely resembles Lord Krishna in appearance. He was married with Suthanu, who was the daughter of Yudhishthira and Draupadi, and their son was Vajra. Banu moved closely with the Pandavas, and won their heart. He was the friend of Samba and Prathyumna, who were also the sons of Lord Krishna.

Bhanu learned his education under his father Lord Krishna, and also he was trained very well in archery by Arjuna. He was very much liked by his uncle Balarama, and he was well trained by him in handling of the weapon “MACE”. Similar to Lord Krishna, he also would play flute, and through his mesmerizing music, even the birds and animals would surround him to hear the divine music.

Bhanu looks very handsome, and he was liked by the Yadava people. Being the son of Mata Satyabhama, an incarnation of Bhudevi, he was a very soft and a polite person, who never talked ill about others. Bhanu had realized about the significance of his father Lord Krishna, and he showed great respects to him.  When the brothers of his wife Suthanu were killed by Ashwathama, he didn’t get angry, but he blamed only the fate. He was such a pious and a kind hearted person!