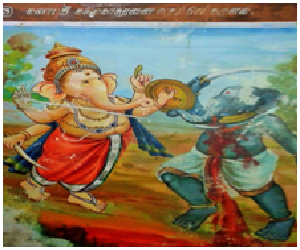 Gajanana refers to Lord Vinayaka, since he contains an elephant head. He also got this name, since he killed the dreaded demon Gajamukhasura. As per legend, it is believed that Lord Vinayaka was born out of the powers of Ma Shakti Devi. Once he served as Gananatha, the Chief attendant of Kailasa, and he didn’t allow his father Lord Shiva to enter into the place of his mother Ma Parvati. He has done this act, since the holy mother was taking bath in a sacred river situated at Mount Kailash. Due to that, Lord Shiva had become angered, and he severed the head of Lord Vinayaka. After some time, Lord Shiva had realised his mistake, and he immediately sent his Divine attendants to fetch a head that suits the body of Lord Vinayaka.

As per another legend, once a demon with an elephant head began to give lot of troubles to the Devas in the heaven and to the humans in the earth. He even tried to occupy the place of Lord Indra in the Indra Loka. Hence all the divine demi gods went to Mount Kailash and explained about their pathetic condition to Lord Shiva. Immediately Lord Shiva had asked his son Vinayaka to slay the demon Gajamukhasura. In order to relieve the Devas from their sorrows, Lord Vinayaka readily accepted the orders of Lord Shiva, and fought bravely with Gajamukasura and killed him. Since Lord Vinayaka had killed the elephant headed demon Gakamukhasura, he is popularly known as Gajanana.

Lord Vinayaka contains great powers, and in the Vinayaka Purana it is mentioned that he holds an Amirtha pot on his trunk, and hence he is also known as Amirtha Ganesa, and those who worship Lord Amirtha Ganesa would get relieved from their prolonged illness and they would become healthier.