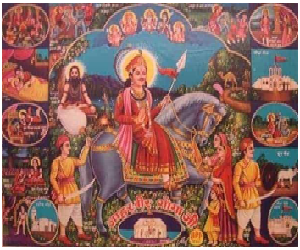 In the Villages of Rajasthan, people used to worship village deities similar to their family deity. Irrespective of their castes, beliefs and communities they are giving good respect to these deities and consider them as their ancestors, since most of the village deities have sacrificed their lives for the welfare of the people. Most of the village deities were killed by others and attained unnatural death. But instead of turning into ghosts, due to their divine power, they have become worshipful minor deities in Rajasthan.

Lot of stories are associated with them, and it would be told by the village elderly people to others. Among the various village deities in Rajasthan, Harbunji is considered as a great warrior god by the people. He was the son of the king and he was born in Bhudel village in Rajasthan. His father was killed by enemies while he was fighting with them. After the death of his father, Sri Harbunji left his village and he met the great Baba Ramdev Tanwar, and become his disciple. Sri Baba Ramdev Tanwar is also a famous village deity in Rajasthan.

Harbhoji was a Kshatriya. Similar to his Guru Ramdev, he is also considered as one of the five main village deities in Rajasthan. His main temple is situated in Baingti Village, Jodhpur in Rajasthan.  Annual festival and fairs would be held to him during Bhadra Shukla Dasami.