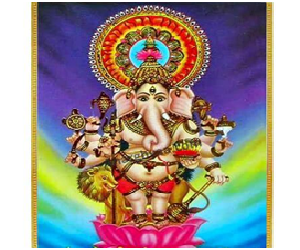 Kan Drishti Vinayagar is a popular form of Lord Vinayagar. He is mainly worshipped by the people to safeguard from the evil eyes of others, and also to remove black magic problems and enemy related problems etc. Lord Vinayaka is the remover of obstacles and would add sweetness in our lives. He is having temples all over the world, and he can be found seated under the sacred trees, and would give warmth to us during our difficult times.

The eyes of the Kan Drishti Vinayagar would be very big, and it is believed that through his big eyes, he would remove the evil spirits and the evil eyes of others. This type of Vinayaka would be worshipped by business people also, and they would keep a big size picture of Lord Kan Drishti Vinayagar in their business establishments, and daily after the opening of office, they would perform puja to the first god, and then only they would start doing their daily work. They are mainly doing this, in order to maintain friendly relationship with their competitors.

As per legend, before going to the war, the kings and their warriors used to worship Kan Drishti Vinayagar, and then only they would proceed for their war activities. It is suggested to keep this Vinayaka in their homes by the newly wedded couples, in order to lead a satisfied and happy married life.

For settling court cases and for resolving land disputes, people are worshipping Kan Drishti Vinayagar. He also removes physical and mental diseases, and would give peace of mind. By worshipping him, we would forget our worries, and all of our disputes would be resolved by the great Lord Vinayaka.