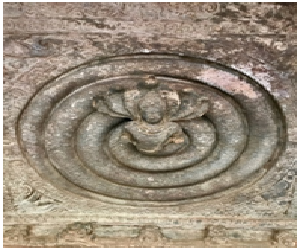 Kauravya was the father of Ulupi and the grandfather of Aravan. His wife was Vishvahini. He is the god of snakes and resides at the Naga Loka, which is situated below the earth. Ulupi was the Naga Princess, and when she was bathing in the River along with her friends, suddenly she saw Arjuna who was also taking bath in the River, and after getting impressed by his appearance, she began to pull him into the depth of the River, and took him to the Naga Loka.

Arjuna was also impressed with the beauty of Ulupi, and hence after getting the permission of her parents, both of them were married. Kauravya and Ulupi had asked Arjuna to drink a kind of wine, in order to increase his powers. After staying in the Naga Loka for a few months, Arjuna left from the Naga Loka, and went to his place. Kauravya is one of the powerful Naga kings, and he is an ancient Naga king. When Bheema was poisoned and pushed by Duryodana in the ocean, it was Kauravya and other Nagas, who took him to their palaces, gave their popular drink, and made him into a very powerful person.

Nagas would live for several thousands of years, and some of them would live even for a few lakhs of years. They are all soft natured people, and usually they would not cause harm to anyone, and only if they are disturbed by others, they would keep vengeance on them, and would punish them severely.

In most of the Hindu temples, a separate shrine for Nagas would be there. By worshipping the shrine of Nagas, we would get relieved from our Naga Doshams as well as from all other Doshams. Kukki Subramanya Temple, Kalahasti Temple and Kudupu Temple are famous temples, and we must visit those temples, for getting rid from Naga Doshams.