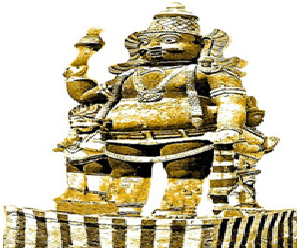 Lord Bhaumia is believed to be the earth god, and he is considered to be the brother of Ma Bhudevi, and he is worshipped as a village guardian deity in some parts of Punjab and Rajasthan. Most of the people in Rajasthan would do special pujas to him, before constructing/purchasing a house or plot. He is also considered to be an incarnation of Lord Shiva, and he is worshipped by all classes of Hindus. Bhaumia is worshipped since several centuries, and his appearance resembles to that of the Tamil Nadu guardian gods like Iyyanar, Kathavarayan and Madurai Veeran.

As per ancient legend, before few centuries, when a cowherd boy was about to be killed by a tiger, he chanted the names of Lord Shiva, and immediately a saintly person had appeared at that place, and killed the tiger, and he introduced himself as Lord Bhaumia, and asked the boy to build a temple for him, and the boy had happily agreed and with the help of few villagers, he built the temple at a village in Rajasthan for Lord Bhaumia.

During the wedding ceremonies in Punjab and Rajasthan, the bride-groom would visit the shrine of Lord Bhaumia, and would make various offering to him. Lord Bhaumia is believed to be protecting the devotees from thefts, murders and also helps the devotees in their agriculture, and gives good yield in crops during the times of harvest.

Lord Bhaumia also protects his devotees from dreaded diseases like plague, cholera and from various other viral diseases. In some villages of Rajasthan and Punjab, parents and grandparents would tell wonderful stories about Lord Bhaumia, to the children, during their bed time.

Lord Bhaumia can also be worshipped by people all over the world, since he is the holy avatar of the almighty, and contains super natural powers. Just by calling his name as “OH BHAGAVAN BHAUMIA”, he would immediately give his help, and protect us from dangers and difficulties. It is believed that Lord Bhaumia is still protecting the village women from thieves and from the people with bad intention.