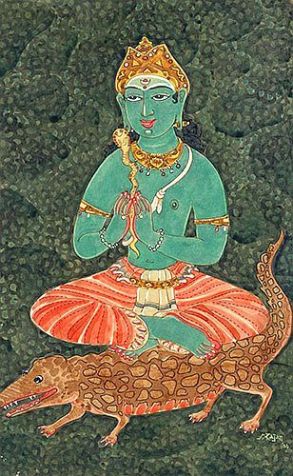 Pushkara is the son of Lord Varuna and Mata Varuni, and his wife is the daughter of Lord Chandra. He had guided Lord Parasurama in handling weapons and taught various kinds of arts to him. Pushkara is living in the Varuna Loka along with his parents, and similar to his father, he contains great powers. He is considered as a pious and a worshipful demi god and he used to pleasantly welcome the sages and the demi gods to his Varuna Loka.

His appearance is similar to that of Lord Varuna, and his mount is Crocodile. Pushkara is praised in the Vedas and he is mentioned in Puranas, and he also receives his share of oblation during fire sacrifices similar to his father Varuna. He is an ancient demi god, and he was born before several millions of years ago. It is believed that he still resides in the Varuna Loka, and discharging his duties along with his father Varuna in a fantastic manner.

He is also respected by the river goddesses like Ganga, Yamuna, Narmada and Godavari, and considered as the prince of the ocean. The detail about Pushkara is mentioned in Ramayana and Mahabharata also, and he helped the Vanaras and the Pandavas during the times of their difficulties.

When Lord Rama wants to build a bridge to reach Lanka, Lord Varuna didn’t respond to his prayers immediately. Due to that, Lord Rama had become very angry and began to shot arrows inside the ocean. At that time, Lord Varuna had appeared along with his son Pushkara and pacified Lord Rama, and helped him to cross the ocean, and also asked Rama to pardon him.

Similar to Lord Varuna, Lord Pushkara is worshipped for getting relieved from various viral diseases, and especially from common cold, diabetes and lung related diseases. He gives good courage, physical and mental energy to us and come with us throughout our life.

Let us worship the Ocean Prince, Lord Pushkara and be blessed.