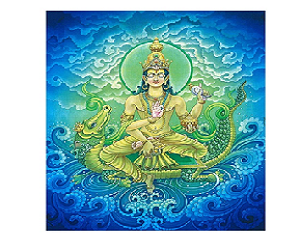 Vaidya is the son of the great ocean god Lord Varuna. Vaidya is mentioned in the Vedas and in the holy texts of Hinduism. He is residing in the Varuna Loka along with his father Lord Varuna. He is safeguarding the Varuna Loka, through his supreme powers, and along with his father Varuna and Lord Indra, he is giving us rain, and making the earth to prosper. In ancient times, kings and farmers used to worship him, in order to get sufficient rain.

Though Vaidya is not a much known god, by worshipping him, we would get relieved from all kinds of diseases, and especially water related diseases like cold, cough and diabetes. It is suggested to worship him sincerely especially by the fishermen and the sea travellers. Since Vaidya is the prince of the ocean, he makes the travellers of the sea to reach safely to the shore. Problems from crocodiles, whales and sharp fish attacks would be avoided through the grace of Lord Vaidya.

Vaidya is also mentioned in Mahabharata, and once he mistakenly took Vasudeva, the father of Lord Krishna to the Varuna Loka, along with his attendants, when Vasudeva took bath in the Holy Yamuna River during the night time. Later on, after knowing about his details, he safely handed over Vasudeva to his son Krishna at the Gokulam.

Vaidya is described in the Puranas as a handsome deva, contains shining body, glitters like the sun, and his vehicle is the crocodile. He is also considered as the friend of Lord Jayanta, son of Lord Indra Bhagavan, and used to occasionally visit the Indra Loka. He used to travel in the seas and also blesses the devotees of Lord Vishnu and Lord Shiva. It is believed that he still lives in the Varuna Loka, and discharging his duties in a wonderful manner.

We can worship him by chanting the mantra, “OM SRI VARUNA PUTRA VAIDYA NAMAHA”, for getting good fortunes in our life.