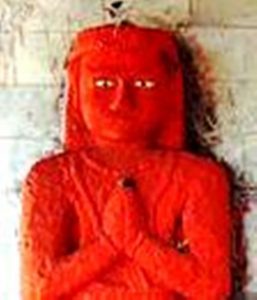 INTRODUCTION
Magardhwaja is considered to be the son of Lord Hanuman, and he was mentioned in some ancient texts.
LIFE
After Hanuman burnt lanka and took bath in the sea, his sweat fell into the mouth of a Giant Fish. Due to that incident, Makardhwaja was born.
The fish was caught by people of Patala Loka, the nether-world. Markardhwaja was found alive when the fish was cut and opened, and hence he was named as Makardhwaja.
By seeing his great strength, he was given the job of guarding the kingdom of Patala Loka.
Hanuman fought with his son in the Patala Loka and defeated him in order to safe guard Lord Rama and Lakshmana from the demon king Athiravana and to rescue them from the Patala Loka. However he blessed his son and declared him as the king of patala, after killing Athiravana.

IMPORTANCE
He was a brave and a knowledgeable person, who was the son of the mighty Hanuman. Though he was the son of Hanuman, he fought with him for the sake of his master Athiravana, and purposefully defeated by him, in order to do his duty as well as to help his father in his task of saving Lord Rama and Lord Lakshmana from his master Athiravana.
He is worshipped for getting great energy, strength, boldness, wisdom and courage.
He contains all the features as that of his father Lord Hanuman, and readily responds to our prayers, and fulfils our wishes and gives us all the prosperity in our life. He will throw out our enemies, and give us a peaceful and a happy life.
Worshipping him is equivalent to that of worshipping Lord Hanuman, since both of them are one and the same.
It is advisable to worship him whenever we worship Lord Hanuman, in order to get good results in our life.
Let us worship him and be blessed.