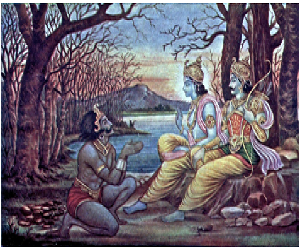 Mayasura is a demon architect, and he was mentioned in the Ramayana and Mahabharata. He is the son of Rishi Kashyapa and Diti. He was married with a pious and a chaste lady Hema, and he had four children, and Mandhodhari is his daughter, who was married with Ravana during the Treta Yuga. After meeting Ravana, he was pleased with him for being a great Shiva Devotee, and immediately performed marriage to both of them.

He had lived in the Khandava Forest, and later he moved to the Sutala Loka, after the forest was being burnt by Lord Agni, as per the instructions of Lord Krishna. During the previous Dwapara Yuga, he built beautiful palaces to the Pandavas, and become their friend. He also worshipped Lord Krishna wholeheartedly and received blessings from him. Maya is well known for his architectural skills. Maya had performed severe penance on Lord Brahma, and due to that, he has got good talents in architecture. He has also got various other boons from Lord Brahma, and he utilised his talents in creating magical and highly sophisticated palaces, and divine aeroplanes. Due to his good qualities, though he was born as a demon, he has acquired the status of a Deva. Similar to the Divine Architect Viswakarma, he also would build marvellous and big palaces within a few minutes time. He is an ardent devotee of Lord Shiva, and he possessed good qualities similar to the pious demon kings like Prahalada, Mahabali, Namuchi and Vibhishana, and he also built beautiful palaces for them.

It is believed that Mayasura is still living in the Sutala Loka along with the pious demon king Mahabali, and is enjoying all sorts of comforts in his life. Mayasura can also be worshipped by us in order to conquer the worldly illusions, and to get happiness and peace of mind.