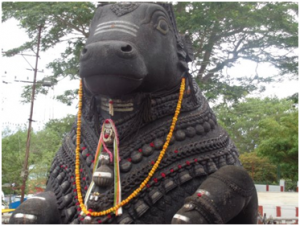 Nandi (Nandikeshwarar) is the guardian of Kailasa, the abode of Lord Shiva and also he serves as the mount to Lord Shiva. Almost in all Shiva temples, the statue of Lord nandi will be there, before in front of Lord Shiva’s shrine. Nandi worship exists for several thousands of years.
Nandi is the son of the sage Shilada. Shilada received Nandi as his son, after doing severe penance on Lord Shiva. By Lord Shiva’s grace, Nandi was born from a Yajna performed by Shilada. Nandi is an ardent devotee of Lord Shiva and he did severe penance, and become his mount as well as the divine gate-keeper of Kailasa.

IMPORTANCE
Nandikeshwarar has got the spiritual knowledge from Lord Shiva and Goddess Parvati. He shared his spiritual knowledge to his eight disciples. Once, Nandi cursed Ravana that his kingdom would be burnt by Lord Hanuman. And it was happened as per his curse.

CONCLUSION
Lord Nandikeswarar, who was a divine attendant of Lord Shiva, taking care of Kailasa as a gatekeeper, and his vision will be always on Lord Shiva. His bhakti on Lord Shiva was magnificent. His statue was installed on all the shiva temples. During Pradosham and Shivaratri festival, abhishekham and archanai will be done for both Lord Shiva and to Lord Nandikeswarar. People will generally tell their problems into the ears of Lord Nandi’s statue, and they believe that Lord Nandikeshwarar will tell our problems to Lord Shiva, and remove our problems. People who are having severe diseases, and suffering from severe mind related problems can do abhishekham to Lord Nandhikeswarar during Pradhosham, and can get relieved from their problems. Let us chant the name of Lord Nandikeswarar and be blessed.