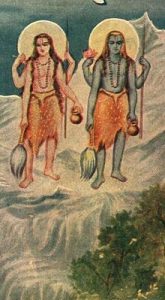 INTRODUCTION
Nara and Narayana are the divine sages containing the features of Lord Vishnu. They have incarnated in order to maintain the dharma in this world and to bless their devotees, and to lead them to the spiritual path.
It is believed that, Lord Krishna in his previous birth was born as Narayana and Arjuna in his previous birth was born as Nara.
Nara means human, and Narayana means Lord Vishnu, but both of them are the incarnations of Lord Vishnu.
Nara and Narayana were performed great penances at Badrinath. They were the sons of Dharma, and his wife Murti. They took avatars on this earth for safeguarding the people from evil effects. It is also said, that they are very holy sages, and no one can disturb their penances, by any other act, since they are the divine avatars of Lord Vishnu.
In Badrinath Temple’s sanctorium, the image of Nara and Narayana is found.
As per Mahabharatha, Krishna says to Arjuna, “you are the Nara and I am the Narayana, and we have come to this world for doing goodness to the entire universe”.
IMPORTANCE
Nara and Narayana had contained great spiritual powers. Once the great bhakt prahalad, mistaken them as warriors, since they kept some weapons with them, and fought with them. But he cannot win over them, and finally he came to know, that they are none other than the forms of his worshipful deity Lord Vishnu. After knowing about them, he apologised them for his mistake, and he was forgiven by the sages Nara and Narayana.
And they were also tested by Lord Indra, who disturbed their penance by sending some apsaras to them, but he couldn’t do that, since they are divine sages.
The names of Nara and Narayana are found in many ancient divine texts, and their importance is also mentioned. It tells that the two brothers are the divine beings, created in this earth, in order to establish the bhakti spirit among the people, and to make them to move into the path of spirituality, in order to get peace of mind, and to eliminate their sins, and to attain SALVATION.

Let us worship the two great avatars of Vishnu and be blessed.