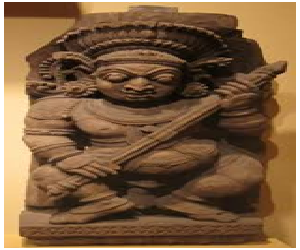 Pushpadanta was considered as one of the Lord Shiva’s chief divine attendants. He attained the position after performing severe penance on Lord Shiva.

Once he served as a temple priest at a Shiva temple in North India. Suddenly, he heard the voice of the divine from the main shrine of the temple, and he hid himself from the eyes of others, and heard the discussion between Lord Shiva and Parvati.

Shiva was telling wonderful stories to Mata Parvati inside the main shrine of the temple, and after hearing the stories, Pushpadanta went back to his home and communicated the incident to his wife and asked her not to disclose the secret to anyone. But his wife Jaya immediately communicated the details to her neighbours, and as a result Shiva and Parvati got very angry with Pushpadanta, and they have cursed him
to become a ghost, and due to that, he took the form of a ghost, and began to wander everywhere. But due to his past birth good karmas, even after taking the form of a ghost, he began to chant the Shiva Mantra “OM NAMAH SHIVAYA” continuously. Due to that, after few years, he got liberated from the curse, and Shiva-Parvati had appeared before him, and changed his form, and took him to the Shiva Loka, and he became a divine attendant of Lord Shiva.

Let us worship the great Shiva Gana and be blessed.