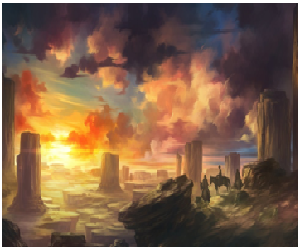 Rahu and Ketu are considered as Navagrahas, and they are mentioned as demonic deities in the Hindu Texts. Once, Svarbanu, son of Viprajith and Simhika took the form of a Deva and drank the divine nectar along with the Devas, at the time of the churning of the milk ocean. After knowing about this incident, Lord Vishnu chopped off the head of Svarbanu, and as a result the head portion of the body become Rahu, and the remaining portion of the body become Ketu. Their mother Simhika is the daughter of Hiranyakasipu and the sister of the pious Prahalada.

Rahu and Ketu are powerful deities and we cannot ignore them in our daily life. They are considered as snake gods, and they would make even the Sun and the moon to get afraid of them, during the time of solar and the lunar eclipse.

Both Rahu and Ketu are considered as shadow planets, and it is considered as very auspicious to light lemon lamps in the shrines of Ma Durga during the Rahu Kala.

The abode of Rahu and Ketu is believed to have been located in the upper worlds, and their palaces are decorated with precious stones, and no one can enter in their place without their permission. Their uncle Prahalada, Devarishi Narada and Indra used to frequently visit their loka. Their palaces were made up of gold and silver, and it was constructed by the demon architect Mayasura. Both of them are living with their consorts in their Lokas.

There are lot of celestial worlds present in the upper worlds as well as in the lower worlds. Those who have done good karmic deeds would reach the celestial worlds, and can enjoy their life for a certain period of time. Excepting the Navagrahas, the Dikpalakas, Vishnu, Shiva and their consorts and children, all other demi gods would have to take birth after the completion of their stipulated period of time. But the great saints and the divine avatars, even if they take birth, would help their devotees, and come with them in every walk of their lives.