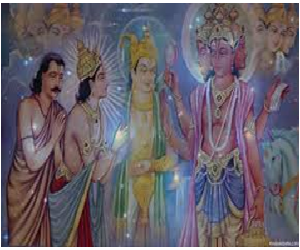 During the Krita Yuga, in the Brahma Lok, among the several devas, there lived a noble deva, whose name is SANGUKARNAR. His main job is to come to the earth and pluck the fragrant flowers, and take it to the Brahma Loka, and give it to Lord Brahma Dev for performing puja to Lord Vishnu. Once, he got delayed to return to the Brahma Loka, and due to that the Puja was not performed in the stipulated time by Lord Brahma. And hence, he was cursed by Brahma to be born into the family of demons, in the earth.

Sri Sangukarna Dev was very much worried, and asked Brahma to apologize him. But Brahma has said, that the curse given by him cannot be changed even by himself, and the birth would be taken by him due to good reasons only, and he will be born as Bhakt Prahalad, and acts as an example for others, with regard to deep devotion on the god.

Due to that, in the Krita yuga, Sangukarnar was born as Bhakt Prahalad, and due to the blessings of Lord Narasimha, after the death of his father Hiranyakasipu, he ruled over the entire earth in a prosperous manner. And in the Dwarapa Yuga, Sangukarnar has again taken birth as the great king Bahlika, brother of King Santhanu, and ruled the Bahlika kingdom in a well versed manner.

And in the Kali Yuga, he again took birth as Vyasaraja, a great Madhwa saint during the period: 1460-1539, and he has constructed hundreds of Hanuman temples, and also served as Rajaguru to the Vijayanagar king, the great Krishnadevaraya and also for some time, served as the chief priest in the Venkateswara Temple, Tirumala, and done many miracles in the life of his devotees. And again in his next birth he was born as Venkatanatha during the year: 1595, who was later known as Sri Raghavendra Tirtha, and attained Jeeva Samadhi during the year: 1671. It is believed that till the age of 700 years he would live in this earth at his Jeeva Samadhi situated at Mantralayam, Kurnool District, Andhra Pradesh. He is doing deep meditation in his Samadhi by chanting Rama Mantra, without stopping even for a second, and blessing his devotees in a remarkable manner. And it is believed that after 300+ odd years, he will be relieved from his curse and he would leave this earth, and reach the Brahma Loka also called as Satya Loka, and will do his regular activity by helping Lord Brahma in his Vishnu puja activities.

It is also believed that similar to Lord Rama, he will take his sincere devotees along with him, to the Satya Loka, or leave them in other holy Lokas such as Swarka Loka, the heaven or Vitala Loka, the underworld, where the grandson of Bhakta Prahalad, the great king Mahabali is ruling over that Loka in a prosperous manner.

Let us worship the great Sangukarnar and be blessed.