Sudalai Madan is a divine hero known to have performed rites in temples and in graveyards who is generally worshipped by Tamil people in South India, particularly in the Tamil Nadu region. But studies show evidence of native Tamil origin of Sudalai Madan. According to one ancient story, he was created by Lord Shiva, so he is considered as the son of Lord Shiva and Goddess Shakti. Madan means protector and sudalai means cemetery or burial ground. He is the eradicator of evil forces and bridles evil forces. Evil forces are believed to emanate from cemeteries and burial grounds. Sudalai reigns over evil forces, so Sri Shiva thus dubbed him as Sudalai Madan. Sudalai is also termed as the Kaval Deivam, or the protecting deity. Sudalai Madan is paramount of the protecting deities. Sudalai Madan is often termed as “Maharaja”. He is worshipped by lot of people in tamil nadu, since their kula deivam is sudalai madan. He has done lot of miracles to his devotees and is still doing. He is the protector of his devotees. He fulfil the needs of his devotees at the right time. People make various offerings and worship him. He is satisfied by the true devotion of his devotees. Based on their devotion and their good behaviour, he will give good results in the life of his devotees.

There are others deities with the name Madan, but Sudalai Madan supersedes all of them. Sudalai is generally considered a rural deity. In the Tamil language, this is referred to as a Grama Devathai.

He is mostly with mother goddess Pechiamman (a form of Kaali), Brahmasakthi Amman and his brother Sudalai Mundan. Madathi is the consort of Sudalai Madan.

Whoever acts against dharma cannot escape from Sudalai Madan. Sudalai Madan will never forgive anyone who is harming his devotees. One has to be pure at his heart and actions to become a devotee of Sudalai Madan. There is the belief that Sudalai is the guardian of the Kodimaram (Flagstaff) in every temple.

Places of Famous and Powerful Sudalai Madan temples are:-

18)Maha SivaSudalai Temple, Colachel and All the places in the region of Tirunelveli, Tuticorin and Kanniyakumari district.

There is no written script for Sudalai Madaswamy. But the history is vocally transferred from ancient history. There are lots of stories which tells about the birth of Sudalaimadan.

Born in Kailash by penance of Parvathi is first birth.

Another story about Sudalai Madaswamy tells of his birth on Kailasa, the mountain home of Siva and Parvathi. It is said that Devi Parvathi wanted a child, but Lord Siva had sworn celibacy. He had promised to be chaste at the request of the gods since they had feared that his union with Parvathy would be so powerful it would shatter the universe. Siva suggests another way to have a child. He tells Parvathy to go and do penance in Ayiramkal Mandapam (Place having 1000 pillars in Kailash). Parvathi did penance. Shiva was happy about that. Then he plucked his hair, it started to burn as soon as he plucked and threw in that place. The fire spread on her mundanai (a part of saree). From the fire, Sudalai Madan is born.

Parvathi initially feeds the child on Amrita (the nectar of immortality), instead of on breast milk. So it is said that the child became immortal. However, the child also became desirous of solid food. He went to the cremation grounds (“sudalai”) on Kailasa and began to eat the burning corpses. since he had such a fondness for meat, it was decided that he ought not to remain in Kailash. Siva instructed him to go to Earth and to care for its people. Siva proclaimed that Sudalai Madan’s protection and kindness would be re-paid with offerings of cooked food and drink, and thus he would always have a meal, as well as people who would pray to him. So Sudalai Madan came to earth, accompanied by a number of singers and dancers who were sent by Siva to see to his worship.

Often Sudalai Madan statues are triangular pillar-like structure and figured statues are stone carved. He is either in open or under a simple roof. The devotees serve non-vegetarian foods to him. Goats, chickens, and pigs are sacrificed and served to him. Fridays are optimum for Sudalai Madan. Special poojas are conducted every last Fridays of Tamil months and yearly once or twice main festivals are conducted for Sudalai Madan. These festivals are called “Kodai”. Kodai is celebrated for one day to many days according to the devotees need. Some famous temples celebrate it for 10 days.

On these occasions, the deities are fully decorated with flowers. Some people get possessed on God and devotees talk to God through them. God goes for hunting in the cemetery through this spiritually possessed person. Art forms of Thappattai beats, Kaniyan Koothu (Maguda Kacheri) and Villupattu are main performances of Sudalai Maadan Kodai festival.

Sudalai Madan is also popular amongst certain segments of the Tamil speaking community in Sri Lanka, Singapore, Malaysia, Réunion and the French overseas territories in the Caribbean sea. 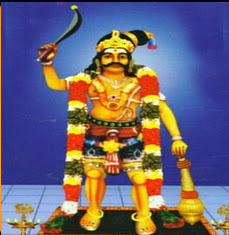