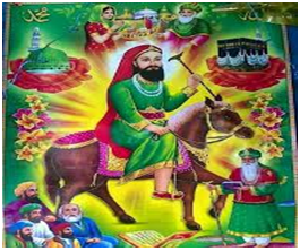 Veer Fatta ji was born in Jalore village in Rajasthan, and he is believed to be the ruler of Jalore village in Rajasthan. He was a sincere devotee of Ma Kali, and used to worship her in the temples. He showed great love and affection on his people, and protected them from wild animals and thieves. He got talented in handing all kinds of deadly weapons, and he was an excellent warrior. He considered the women as Ma Shakti Devi, and gave good respect to them. During his period, all of his people were lived happily and peacefully without facing any troubles in their life.

Once while he was fighting with his enemies, he was cunningly killed by them. He left his life for the welfare of his people, and after his death, people began to worship him as their Devata, and the people living in Jalore village considered him to be their beloved deity, and a big temple was constructed for him in Jalore village. Every year, grand festival would be celebrated at his temple, and huge fair would be organized by the village people every year.