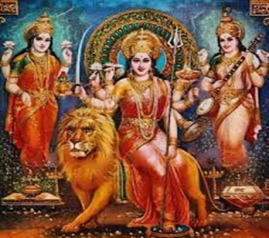 Ma Shakti Devi contains very attractive features, and she contains a beautiful appearance. She has been praised by the great saints like Adi Shankara for her pleasing look. Tamil speaking Hindu devotees, used to fondly call her as Amman, and she would be dressed with rich costumes and also she would be adorned with precious ornaments, especially during festival days, and also during the Tamil month of Aadi, and during that time, she looks like a newly wedded bride. Ma Shakti Devi is also called as Kalyani and Kalyana Sundari, and her consort Lord Shiva is called as Kalyana Sundarar.

The great Saint Sri Adi Shankara had sung many songs in praise of Ma Shakti Devi, and in one of his songs, he said, “With two eyes, we cannot enjoy the wholesome divine beauty of Ma Shakti Devi, for enjoying her entire beauty, we must have at least one thousand eyes”. In this Kali Yuga, Ma Shakti Devi is considered as the best deity, since she removes the sins and diseases from us, cleanse our mind, and also make us to taste the essence of “BHAKTI”. In this present world, to some of her staunch devotees, she would give some small disturbances in their life, in order to make them to realise her fully, and also to make them to concentrate their entire attention on worshipping her.