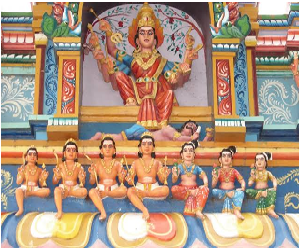 Nallathangal history is based on the  sufferings faced by Nallathangal in her life and she is popularly worshipped by the people of Tamil Nadu. It is believed that she is still living in her temple and blessing her devotees. She had committed suicide by falling into the well along with her seven children due to starvation. On knowing about the incident, her affectionate brother has also committed suicide by falling into the same well.

Nallathangal is worshiped as a village deity. The temple is situated at Vatrayiruppu near Srivilliputtur.

Once, the noble couples Ramalinga Sethupathi and Indrani ruled the village Vatrayiruppu. They got two children. They lost their parents when they were young. However, Nallada Thambi, took care of her younger sister in a proper manner and married her to Kaziraja, a small ruler of the Sivaganga district.

Since her brother had gone for attending his duties, her brother’s wife ill-treated her and didn’t provide food for Nallathangal and to her seven children. Nallathangal was very much depressed by her act and committed suicide along with her children. And after some time her brother was also committed suicide. After death, she became a goddess and is still blessing her sincere devotees and giving them all sorts of prosperities in their life.

Aadi, Ani and Thai Pongal Festival is celebrated here every year. Lot of devotees from tamil nadu would visit this place to worship the holy mother along with her children.

It is a must to visit this temple for unmarried and married people. Those who are unmarried will get married soon and those who are married will remain steady in their marriage life without any problems and quarrels in their life, and they will also get good children. She will remove the fear from the minds of her devotees, and makes them to live bravely in their life. She also removes several dreaded diseases and mental disorders of her devotees and gives them good fortunes in their life.

Let us worship the holy mother MA NALLATHANGAL and be blessed.