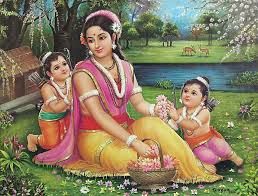 INTRODUCTION
According to the great epic Ramayana, Lava   and his twin brother Kusha, were the children of Rama and Sita. Lava and Kusha looks attractive in their appearance similar to their parents.
Lava and Kusha belongs to the Ikshvaku clan and lived during the Treta Yuga. Lava was elder brother and Kusha was younger.
According to the Ramayana, Sita was banished from the kingdom of Ayodhya by Rama due to the rumours made by the people of his kingdom about Mata Sita, since she was under the custody of Ravan for several years in Srilanka.
She took refuge in the ashram of Sage Valmiki located on the banks of the River Tamsa. Lava and Kusha were born at the ashram and were well educated and trained in all kinds of arts under the guidance of Sage Valmiki. They also learned the story of Rama.
After some time when Sita was very much depressed about her condition, she went inside the earth, since she was the incarnation of the earth goddess Bhudevi. Rama then learnt that Lava and Kusha were his children, and brought them to his kingdom, and took care of them properly.
Lava and Kusha became rulers after their father Rama and also founded the cities of Lavapuri( the present day Lahore)  and Kasur respectively. There is a temple dedicated to Lava in Lahore.
Let us worship the divine sons of Rama and be blessed.
“OM SRI LAVA, KUSHA NAMAHA”
“JAI SRI RAM”
“JAI MATA SITA”
WRITTEN BY
R.HARISHANKAR