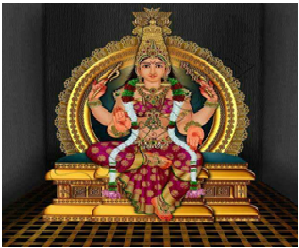 Jayanti was mentioned in various Puranas, Vedas and in other holy texts. She looks very beautiful similar to her mother Indrani, and she was mentioned as a chaste, holy and pious woman. Once she was sent by her father Indra to disturb the penance of Guru Shukra. But instead of disturbing Shukra’s penance, she served Guru Shukra in a pleasing manner, and as a result she won his heart, and become his consort. Though Jayanthi was the daughter of Indra, she didn’t show her richness to her consort Shukra. Even after becoming his wife, she ate only simple food like fruits and greens, and lived like a noble Rishi Pathni. Jayanthi is mentioned in Ramayana and Mahabharata. She showed her kindness to all the demons, and especially to the noble demons like Prahalada, Mahabali, Namichi and Vibhishana. Bhakta Prahalada considered her as his own mother Kayadu, and showed great respects to her.

Once Lord Indra wanted to defeat Prahalada and due to that, he approached his daughter Jayanti to help him. Though she was not interested in doing such an act, due to the insistence of her father Indra, she has agreed. And as a result, when Prahalada visited her, she asked him to donate all of his good deeds (Punya) to his father Indra. Prahalada wilfully done like that, and pleased his Guru Pathni. Mata Jayanthi can be seen along with Guru Shukracharya in some of the temples dedicated to him in India. It is believed that by worshipping her, we would get the grace of Lord Indra, Shukra and Bhakta Prahalada.