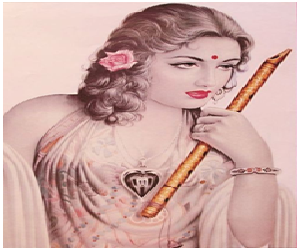 Chitralekha was the goddess of magic, and she lived in the previous Dwapara Yuga. She was a friend of Usha, who was the daughter of Banasura, who ruled the present day India through his great powers.

Once, Usha dreamt of meeting a lovely person, who is none other than Lord Krishna’s grandson Aniruddha. She informed about her dream to her friend Chitralekha. Chitralekha drawn several pictures of young men, and finally Usha had identified her dream boy.

Through her magic powers, Chitralekha brought Aniruddha from Dwaraka to the palace of Usha.  Usha made Aniruddha to hide in a room, nearby her palace, and both of them played games, talked about funny things, and spent their life in a lovely manner. In course of time, Banasura came to know about the presence of Aniruddha in his palace, and hence he put him in a prison. After some time, Lord Krishna fought and defeated Banasura, and finally Banasura had realized his mistake, and then Usha and Anuruddha married with each other.

In her previous birth, Chitralekha was a Gandharva Princess, and due to a curse she was born in the earth. Chitralekha was an ardent devotee of Lord Krishna, and she knew about the purpose of his avatar in the earth. She also was liked by her master Banasura’s great grandfather, Bhakta Prahalada, and through his blessings, she lived a pious life.

Ancient Puranic women consist of very good qualities, and they were liked by anyone. They showed motherly affection on others and remained as a chaste woman throughout their life time. Due to their chastity and holiness, they got great powers, and they utilized their powers only for productive purposes.

After living a noble life for many years, Mata Chitralekha returned to her Gandharva Loka, and it is believed that she still lives in the Gandharva Loka by enjoying all sorts of comforts in her life.