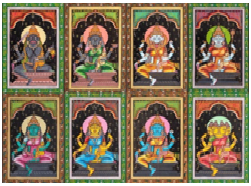 The Matrikas are usually worshipped in seven forms, but in some places, they are worshipped in eight forms. The Matrikas are created to assist Ma Shakti Devi, during her fight with the terrible demons. The Matrikas are mentioned as warrior goddesses, and they would make us into brave people, and would relieve us from fever, hunger, and from various kinds of diseases. They would destroy the evils from our mind, and would inculcate the Shiva-Shakti Bhakti on us, and would show us the spiritual path. Matrikas are given an important place in the Selliyamman temple at Alambakkam in Tiruchirapalli district and they appear in a separate shrine, and special puja and abhishekham would be done to them during Fridays, Tuesdays and on other auspicious festival days.  In Tamil Nadu, the matrikas are worshipped as Saptakannigal and they are worshipped in most of the temples of Lord Shiva and Shakti. In the famous Mangadu Amman Temple, a separate shrine for Saptakannigal is there, inside the temple premises. Matrika Worship is prevalent in Tamil Nadu since Vedic times, and it is mentioned in some Holy Texts of Hinduism.

Some shrines of the Saptamatrikas would be situated near lakes or rivers, and their idols are made out of granite stones. They have appeared in the dreams of the ancient kings and asked them to build separate shrines for them. The Saptamatrika would be offered with fruits and flowers, and Mantras would be chanted during the performance of puja.  There are lot of deities in our holy Hinduism. Among those deities, Saptamatrika worship is very popular, and it fetches good results in our life.