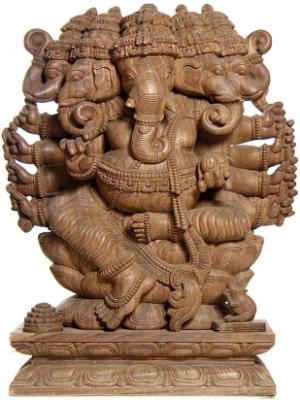 Heramba refers to the gigantic form of Lord Ganapati, and in this form, he appears with five heads and ten arms, he contains various weapons in his hands, and he is having wonderful temples at Bangalore and Tamil Nadu, which would be very much crowded during the Vinayaka Chathurthi Festival day.

Heramba Ganapati is popularly worshiped by the Hindus in Nepal. In the Puranas, Heramba Ganapati is mentioned as the supreme form of Lord Ganapati, and he has taken this form in order to show his supremacy before others. Lord Ganapati has shown his divine form (Viswaroopa Darshan) to the Devas, and proved that he is the ultimate Brahman (The Supreme God), and as per the Vinayaka Purana, it is mentioned that he exist even before the creation of the world, and only through his powers, the entire universe functions.  Heramba Ganapati is considered as the Protector of the poor, down trodden and unhealthy people. He gives good knowledge, courage, will power and wisdom to his devotees, and also grants good health and wealth to them.

Heramba’s five heads represents the five Pancha Bhootams, namely, the fire, water, air, land and sky. In this form, Lord Ganapati looks very beautiful, his face shines brightly like the sun, and in some pictures, Heramba can be seen along with his consorts, Ma Riddhi and Ma Siddhi. The Divine vehicle of Heramba is the lion, and it represents the Shakti element. As per legend, Lord Ganapati had taken this powerful and fierce form, for destroying the demons.

The image of Heramba Ganapati is also found in some ancient temples of Odisha. We can worship Heramba Ganapati in order to get rid from fear and from enmity problems. Those who are absent minded, dull and lazy would be relieved from their weaknesses if they sincerely worship Lord Heramba. If any woman are subject to travel to unknown places, would get great boldness and strength, if they worship Lord Heramba before their travel, and Lord Heramba would protect them and follow them like their shadow, and he would act like their guardian god. Heramba can also be worshiped in the form of child Ganapati, and he would bless the childless couples to give birth to a noble child. He also solves marriage related issues, and he would make the couples to happily live for ever in their life.

Lord Vinayaka is worshiped as the first god, and similar to other deities, he has also taken various forms, in order to maintain peace and prosperity in the entire universe. He is worshiped all over the world, and now his significance is widely spread even in foreign countries, and many foreigners are willingly worshiping him by offering Mothakams, fruits and flowers to him in the Hindu temples present in abroad. Since he is worshiped even by the gods and demi gods, we should regularly worship him in order to remove the obstacles in our life.

Let us offer our sincere prayers to Lord Heramba and let him remove the troubles and turmoil of the people in the earth.