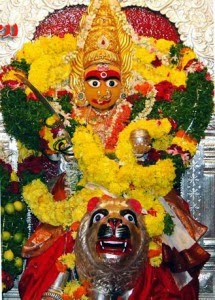 Goddess Pochamma is a mother goddess who is mainly worshipped by the Telangana and Andhra Pradesh people. She protects people from all kinds of diseases, and also she safeguards them from their enemies and gives all the prosperity in their life. Goddess Pochamma is a guardian deity and is considered as a Village Devata. The most important festival dedicated to Goddess Pochamma is the Bonalu festival which is celebrated in the month of July – August. Pochamma is also considered as an aspect of Goddess Kali. It is told that she will create problems for the people if they reject or dislikes her, and gives various diseases to her dis-obedient. But the holy mother, will never do like that. In fact, she will correct the mistakes of the people and make them to realize that she is their divine mother.  In Adilabad district, Pochamma is called as Gajjelamma. The idol of pochamma is made out of fine wood and is placed near a neem tree. Usually she will be dressed with yellow coloured dress. The devotees make small idols of her and place them in the temple. Her husband Mahamuni is the guardian deity of all the animals, birds, small insects, ants and trees in the forest. The festival of Bonala panduga and Pochamma panduga are performed in villages. Generally people worship her on Sundays. The devotees perform puja and ‘Abhishekham’ and decorate her with flowers and offer fruits and food items like sundal, mixed rice to the deity, and distribute it to the participants of the puja after the performance of the puja. Though she doesn’t prefers, animal sacrifice is also done in this temple, in order to please the divine mother.

Mata Pochamma will come with us in our every walk of life, and will be our permanent protector. From our birth, till our death, she will be with us in our every moment of life, and gives more courage, strength, enthusiasm, knowledge and wisdom to us. She will immensely cure our dreaded diseases and reduce our sins committed in past births and makes us to walk freely in the outside world, and finally will also give SALVATION to us based on our pure bhakti on her.