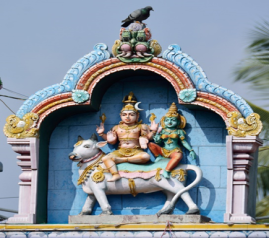 Rishabarudar is a form of Lord Shiva in which he can be seen seated on his divine vehicle, Lord Nandikeswarar along with his consort Ma Parvati. This form can be seen in the top of most of the Shiva Temples, and the image of Lord Shiva and Ma Parvati would be engraved in the sculptures. This form is taken by Lord Shiva in order to show the significance of his gate keeper and divine vehicle, Lord Nandikeswarar.

Lord Nandi is considered as the son of sage Shilada. Once Sage Shilada had performed severe meditation on Lord Shiva, and due to that, he was blessed to have a pious son.  Lord Nandi was born from the sacrificial fire, which was performed by Shilada, and during the time of his birth itself, his body glitters like that of precious gold and diamond. Nandi grew well, and from his childhood onwards, he practiced meditation, and worshipped Lord Shiva sincerely. Due to his utmost devotion on Shiva, Lord Shiva had made Nandi into his divine gate keeper as well as his Vahana. Lord Nandi is considered as the first and foremost divine attendants of Lord Shiva, and he is chief among the Shiva Ganas. Similar to Lord Vinayaga, he is also called as Shivagana Natha, the controller of the divine attendants of Lord Shiva.

The place where Lord Nandi was performed penance on Lord Shiva is believed to be the present day Nandikeshwar Temple, in Jabalpur, Madhya Pradesh, and it is situated on the holy banks of River Narmada.