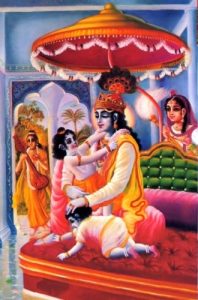 INTRODUCTION
Samba was the son of Lord Krishna, and Jambavati. His grandfather was the great “JAMBAVAN”, the bear king, who lived in treta yuga and also in dwapara yuga. In the ancient times, people were also worshipped the sons of Lord Krishna.
Samba was born due to the severe penance of Lord Krishna on Lord Shiva. He contains the features of Lord Shiva, and at his younger age itself, he learnt the various forms of art, along with divine scriptures and the handling of powerful weapons by the great scholars, and also by his father Lord Krishna. He resembled with Lord Krishna with regard to his mischievous activities made during his childhood. He was attracted by his playful activities and was loved by the entire people of Dwaraka. He has got many brothers and sisters. He was married to Lakshmana, the daughter of duryodana.
According to puranas, samba was suffered from leprosy due to the curse of sage Durvasa, since he misbehaved with him.

After some time he got cured from the disease by worshipping Lord Surya. As per the curse of Gandhari, at the end of dwapara yuga, all the yadavas were destroyed by attacking one another, and their dynasty comes to an end, and Krishna and Balarama also departed from this earth and merged with Lord Vishnu.
IMPORTANCE
He was the loving son of Lord Krishna and Mata Jambavati. He got talents at his early age itself, and also contains all the divine qualities as that of Lord Krishna. He was also blessed by his grand- father JAMBAVAN, and he looked very handsome and attractive. The dwaraka people were much liked him for his kindness shown on them, and for his good activities.
Let us pray to the great son of Lord Krishna, and be blessed.