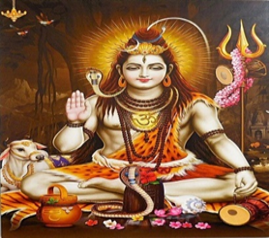 Lord Shiva can be praised for his good qualities like simplicity, adjustability and generosity. He is very generous of given sufficient wealth to his devotees, and also would add lot of Punya to their life account. Even some of the non-worshippers of god, and even some people who belong to other religions showed their sincere faith on Lord Shiva, due to his good features. During the time of Lord Shiva’s marriage with Sati, the first avatar of Ma Shakti Devi, large number of celestial people were present at the place of marriage, in order to witness the divine wedding ceremony, including Lord Vishnu, Ma Lakshmi, Lord Brahma, Ma Saraswati and his sons Narada, Pulastiya, Marichi and his personal divine attendant Lord Shanku Karna. Lord Shiva tied the sacred Mangalsutra on the neck of Ma Sati Devi, and the celestial devas began to shower flowers on to the Divine couple. Once, Lord Shiva had saved a British official from the battle field, due to the staunch devotion showed by his wife on Shiva. After hearing about the significance of Shiva, a wife of a British Official prayed to Lord Shiva for the safe return of her husband from the battle field. Her prayers were answered by Shiva, and when her husband was about to be attacked by the enemy soldiers, suddenly a Saint like person appeared before them with a shining body, and he also contains a trident on his hand. He began to rotate his trident in a faster manner, and due to his act, the enemy soldiers were afraid, and fled away from that place. Then the British couple constructed a small temple for Lord Shiva as a token of expressing their gratitude on him.

Lord Shiva can be seen in the company of his ghost attendants, and he likes to dance cheerfully in the burial grounds, since he has never felt proud about his supremacy. Lord Shiva never used to dress rich garments, and he dislikes in wearing golden ornaments. His neck decorates only with the divine snake Vasuki, and he used to wear the tiger skin by considering it as the silk Dhoti. He also used to wear the skull garlands on his body, and would apply the holy sacred ash all over his body. Due to that, he is being worshipped even by people belonging to Tribal communities, under privileged people, beggars and by the Aghoris. In order to safeguard the entire universe from destruction, once, Lord Shiva had even drank the powerful Hala Hala poison, and since it was struck on his neck, he is also called as “NEELAKANDA”, the one who contains the blue coloured throat, “NATARAJA”, a great cosmic dancer, “AMBIKAPATI”, the lovely consort of Ma Ambika, “SARVESWARAN”, the controller of the entire universe, “KAILASAPATI”, the one who lives in the holy Mountain Kailash.   A Hindi Bhakti film titled as Shiv Mahima was produced during the year 1992 by the late Shiva Devotee Sri Gulshan Kumar and in that picture, the significance of Lord Shiva was mentioned in a detailed manner. The film was also well appreciated by the audiences for relaying wonderful incidents from the Shiva Purana.

Let us worship Lord Shiva by observing fasting on this auspicious Maha Shivratri day (01.03.2022), and let us be blessed.