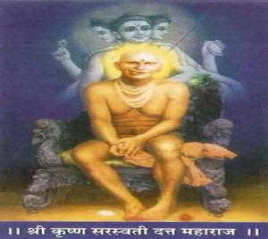 Shri Krishna Saraswati Swamigal (1836-1900 AD) was lived in Kolhapur, Maharashtra. Swami was also called as Dattaswami. He is considered as an avatar of Lord Dattatreya. He was a spiritual saint and born in this earth to propagate the teachings and importance of Lord Dattatreya among the people. He will used to visit the famous temple of Mata Mahalakshmi at Kolhapur, and offer his prayers to the goddess.

Swami has got large number of followers, and the most prominent one is Sant Namdev, who lived in Kolhapur. His disciple Guruvarya Appa has shown the spiritual path to many devotees of Lord Dattatreya and guided them properly.

Sri Krishna Saraswati Swamigal has shown his true form as Lord Dattatreya to his sincere devotees. He has spread the importance of Hinduism among the masses, and cultivated the bhakti spirit among the people. During his period, he has removed the sufferings of the people, and resolved their mental problems and erased the badness from their hearts.

He has eliminated the diseases from the body of the people, and made them to attain great physical and mental strength and shown them the correct path for leading their life properly. He was praised by the people for his kindness and goodness, and respected him in a proper manner. He was a humble and a noble saint who lived for the sake of the people, and lived a pious life.