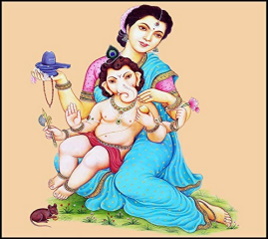 Lord Vinayaka is also known as Shakti Vinayaka Moorthy, since he was born out of the powers of Ma Shakti Devi. As per legend, once Ma Shakti Devi created Vinayaka, since she wants a lovely son who is capable of granting boons to his devotees and also to remove the obstacles in their life. Lord Vinayaka contains a pleasing appearance, and he is also blessed by all other gods and goddesses, and they have also granted lot of boons to him.

Since Vinayaka was born out from the powers of his holy mother, Ma Shakti Devi, he is also called as “SHAKTINI”, and “VINAYAKI”. Vinayaka is also called as “LAMBHODHARA”, one who contains big stomach, “VIKATARAJA”, one who pleases others through his mischievous acts, “VIKNARAJAVE”, one who removes the obstacles in our life. As per the holy Vinayaka Purana, after getting the SHAKTI (supreme powers) from his mother, Vinayaka is capable of holding the entire universe on his stomach. Vinayaka worship is followed since several millions of years, and it can be known by reading the life history of Sage Purushundi, a staunch devotee of Lord Vinayaka, who lived in the Treta Yuga.

Vinayaka is worshipped by the ancient Chera, Chola and Pandya Kings, and they have also constructed some temples for him. There is a famous “SRI SHAKTI VINAYAKA TEMPLE”, at Coimbatore. Devotees worship Lord Vinayaka at this temple by considering him as the holy mother Ma Shakti Devi, and during festival times, Lord Vinayaka would be dressed similar to Ma Shakti Devi, and devotees would worship him with utmost faith and devotion.

Even if we worship an ordinary stone or a tree by considering it as a deity, it would be treated as a deity, and based on our faith, our prayers would be answered. Vinayaka Bhakti would lead us to the gateway of heaven, since Lord Vinayaka is only considered as the “FIRST GOD” in Hinduism. Lord Vinayaka and Ma Shakti Devi are worshipped by most of the Hindus, by considering them as the supreme manifestations of Lord Shiva.