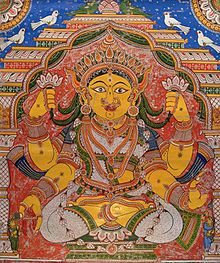 INTRODUCTION
Subhadra is an important character in Mahabharata and she is considered as an incarnation of Mata Parvati. She is the sister of Krishna and Balarama, wife of Arjuna,  mother of Abhimanyu, and she is the daughter of Vasudeva and Devaki. Subhadra is well-known for her kindness, holiness, chastity and purity.
Once, Arjuna  travelled to Dwarka and met Krishna, and expressed his wish to marry Subhadra, and Lord Krishna has agreed. But Lord Balarama was interested in marrying her with Duryodana. Due to that, Arjuna kidnapped Subhadra and bravely fought with Balarama and his army and defeated them. Finally, Krishna pacified Balarama and gets his consent and conducted the marriage of Subhadra with Arjuna in a grand manner.
Mata Subhadra is a charming lady with attractive face and contains a divine look. She showers her motherly affection on her devotees and safeguards them in their day to day life. By worshipping her, we would get the blessings of Lord Krishna and Balarama also.
Subhadra is one of the three deities worshipped at the Jagannath temple at Puri, along with Krishna and Balarama. She is also worshiped as a family deity by certain sections of people in Odisha, West Bengal and Gujarat.
Let us worship the holy mother and be blessed.
“OM MATA SUBHADRAIYE NAMAHA”
“JAI KRISHNA”
“JAI BALARAM”
WRITTEN BY
R.HARISHANKAR