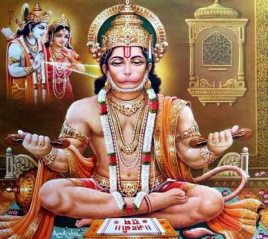 Lot of interesting incidents are associated with Lord Hanuman, especially, when he served as the divine attendant to Lord Rama, after the completion of his exile term, and after he becomes the king of Ayodhya. Lord Hanuman served very faithfully and fondly to Lord Rama, and he is considered to be the most important Bhagavatha of Lord Vishnu, from the Treta Yuga, though Prahalada and Dhruva served as the Bhagavathas of Lord Vishnu during the Krita Yuga itself.

Though Hanuman contains good valour, strength and memory power, yet, out of his Rama Bhakti, sometimes he behaved like a small child. After knowing about the significance of applying the Sindoor on the body from Ma Sita, Lord Hanuman began to apply the holy Sindoor all over his body, and that’s why in most of the Hanuman Temples, Sindoor would be adorned all over the body of Hanuman.

Some of the Unknown facts about Lord Hanuman are as follows:-