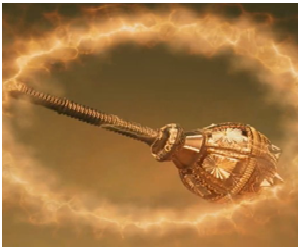 Kaumodaki is the gada (mace) of Lord Vishnu. Vishnu can be seen in the pictures holding the Kaumodaki in one of his four hands. The gada is also considered as one of the powerful weapons of Lord Vishnu. “Kaumodaki” is mentioned in Mahabharata, where Lord Krishna used this weapon during the times of battles with the demons, and he gave it to Bheema in order to protect him from his enemies. Bheema used this holy mace during the Kurukshetra battle, and for some time he also gave it to his son Gatotkacha.

Gada can be seen in the ancient sculptures of Lord Vishnu.  The gada is also used by Vishnu’s avatars Matsya, Kurma, Varaha and Narasimha. In the Mahabharata, Kaumodaki is described as a very powerful weapon, and it slayed many demons, and it is gifted by Varuna, the                      god of ocean, to Lord Krishna.  Kaumodaki is the divine mace which permanently dwells with Lord Vishnu, and he has brought victory to the Devas during the time of battles between the demons and the Devas. Kaumodaki is a heavy weight object, and lifting it itself requires lot of energy. In the Dwapara Yuga, Balarama and Bheema are experts in handling the holy mace, and through that they had defeated their enemies.