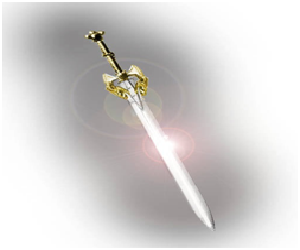 Nandaka is the holy sword of Lord Vishnu, and he is the king among the swords. Lord Vishnu can be seen in some pictures holding the divine sword Nandaka in his arms. The sword is considered as the companion of Lord Vishnu, contains shining appearance, and glitters like the Dhuruva Star. The great Vaishnavite saints Annamacharya and Pey Azhwar are believed to be the incarnations of Lord Nandaka.

Nandaka sword was used by Lord Indra also during the battles with the demons. According to legend, Lord Krishna used this Nandaka sword during his fight with the powerful demon Narakasura. It is also told, that the forthcoming Kalki Avatar would be using this sword to kill the evil ones in order to protect the good ones. Since Nandaka dwells with Lord Vishnu, he contains the features of Lord Vishnu, and worshipping Lord Nandaka is similar to worshipping Lord Vishnu.

Let the divine weapon Lord Nandaka kill our bad habits, and let him makes us into pure and pious.