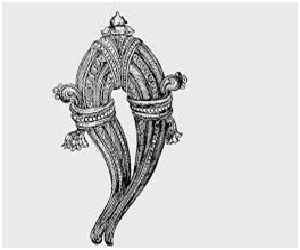 Pasha is the divine weapon of Lord Ganesha, it is also called as “Angusha”, and it looks in golden colour, and it also looks very beautiful in appearance. Through his Pasha, Lord Ganesha removes our evil behaviour, and helps us to generate a good behaviour. Pasha also removes the illusion, diseases and evil thoughts and gives enlightenment to us, and it also represents the “OM” symbol. In the pictures of Lord Ganesha, he can be seen holding the Pasha weapon in one of his four hands.

According to Ganesa Purana, Lord Ganesha had killed the demon Gajamukasura, through the holy weapon Pasha, and as per his request, he has made him into his divine vehicle Mooshika, a form of rat. Pasha is also used by Lord Varuna and Lord Yama as a weapon. Lord Yama uses this Pasha weapon, to take the lives of the people, and he would tie the souls of the deceased ones through his Pasha, and would take it to his abode, the Yama Loka. And based on the karmic deeds of the souls, he would either send them to the divine worlds, or he would give punishment to them in his Yama Loka.

Lord Varuna also used this Pasha and killed the wicked demons. In several slokas of Lord Vinayaka, the name of his weapon “Angusha” is mentioned. According to legend, Lord Ganesha had also defeated and killed the terrible demon Sindurasura with his Pasha, and gave him Salvation.

It is believed that in the divine weapons, the powers of the god would be there. Worshipping the divine weapons like Pasha, Sudharshana, Saranga and Trishula would give good strength to our mind and body, and we would be blessed by the divine gods in the heaven.