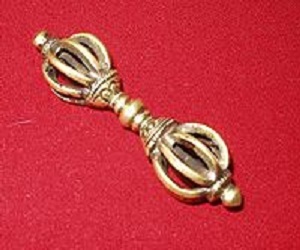 Vajrayudha is the divine weapon of Lord Indra Bhagavan, and he is the master of devas, and the god of rains, and he resides in the Indra Loka, also called as Swarka Loka. He has used this powerful weapon during the times of battles with the demons, and if he invokes this weapon, by chanting the mantra, his enemies would be killed instantly. Through the use of this weapon, he has killed large number of demons like Vritasura.

The divine weapon Vajrayudha was mentioned in ancient Hindu texts like Vedas, Puranas, Bhagavatha and Mahabharata. This divine weapon was made from the backbone of the great sage Dadichi, who had sacrificed his life, for the sake of protecting the Devas from the powerful demon Vritasura.  Lord Indra is capable of handling Vajrayudha, and it is believed, that he would kill the ego and bad habits of his devotees through his Vajrayudha.

Lord Indra is a great god, and he is more powerful than that of Lord Agni, Vayu and Varuna. He is the master who controls all the demi gods, and also the river goddesses like Ganga, Yamuna and Godavari. He is under the control of Lord Brahma, and he frequently used to visit the Satya Loka, the abode of Lord Brahma, for discussing various spiritual matters with him.

Once Indra has invoked this powerful weapon on Prahalada, but he could not kill him. Instead of hurting him, the weapon generated lot of scented flowers and sprinkled it on Prahalada. Due to that, Lord Indra was very much astonished and prayed to Lord Vishnu. Lord Vishnu appeared before him, and informed to him, that Prahalada is one of his best devotees, and he has granted various boons to Prahalada, that he and his descendants could not be killed by any weapon, and that their death would occur naturally, and after their death, they would attain salvation. After hearing these details from the mouth of Vishnu, Lord Indra bowed his head before Prahalada, and left from that battle field.

Vajrayudha is a very powerful weapon, and it can be compared equivalent with other divine weapons of Lord Vishnu like Sudarsana, Koumodaki and Sharanga. Vajrayudha quickly responds to the instructions of Lord Indra, and would kill the enemies of Indra at a great speed.