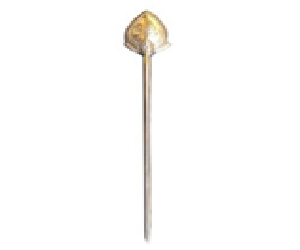 Spear also known as Vel in tamil, is related with Murugan, son of Lord Shiva and Mata Parvati, and he is also called as VelMurugan and by several other names. He is mostly worshipped by the Tamil speaking people in Tamil Nadu and also in some foreign countries like Singapore, Malaysia and Srilanka.

Lord Muruga had got this divine weapon spear from his mother Parvati, during the Thaipoosam festival day, in order to kill the demon Surapadman. Vel contains the powers of Mata Parvati, and it represents the “VICTORY” symbol. With the help of the divine spear, Lord Muruga had killed Surapadman, and made him into his vehicle peacock.

In most of the Murugan temples, before the main shrine, a Vel would be kept for worship. Worshipping the divine spear is similar to worshipping Lord Muruga. Vel would give boldness to us and would protect us from our enemies, and it destroys the evil forces and protects the good ones.

In the famous Skanda Purana, the importance of Lord Muruga and his “VEL” is mentioned. During the Thaipusam festival day, lot of Murugan devotees would pierce a small piece of Vel in their body, as a token of expressing their love and devotion on Lord Murugan.

Lord Murugan would cure the diseases of his devotees, and he would mainly relieve the dumbness and deafness of the devotees. As per the legend, once a Muruga devotee had suffered from severe stomach pain due to his bad karmas. He prayed to Lord Muruga, and asked him to cure his stomach ailment. After a few months period, the devotee was completely relieved from his disease, and in order to show his gratitude to Lord Muruga, he immediately cut his tongue, placed it in a golden plate, and kept in front of the Muruga shrine in a famous Murugan temple.

To the surprise of everyone, within a few months period, his tongue began to grow. The Murugan devotee was very much pleased with Lord Murugan, and he donated a golden spear to the Murugan Temple, and in course of time, he has donated all of his wealth for the welfare of the poor people, and he had become a saint and stayed in a Murugan Temple in Tamil Nadu till his death. Similar to this incident, lot of miracles had happened in the life of Murugan devotees.