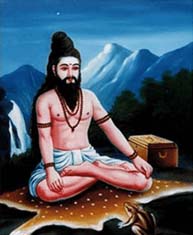 INTRODUCTION
Theraiyar is one of the 18 Siddhas. He has written lot of texts which are very useful to the mankind. His guru is Dharmasoumini. He learnt all the subjects from him, and was an expert in the field of Ayurveda and siddha, and rendered his writings on that.
FAMOUS TEXTS
1. Pattartha Guna Chintamani
2. Maniwenbha Medicine
3. Theraiyar Venba
4. Theraiyar Maruthuva Bharatham
5. Theraiyar Kappiyam
6. Theraiyar Paadal Thirattu
7. Theraiyar Tharu
8. Theran Yamaga Venba
9. Theran Thaila Varkka Churukkam
10. Anuboga vaidya Deva Ragasiyam
He is also a disciple of Agastiyar, and learned all the divine subjects from him, and also was blessed by him. It is believed that he lived several thousands of years ago.
He is an expert in all kinds of arts, and a scholar in all the subjects and he discovered many new effective medicines and wrote various texts on that.

He has written a very famous text known as Theraiyar karisal-300, which contains the details of preparation of various siddha medicines, which are very useful for the siddha physicians in this today’s world.

He is said to have attained Samadhi in Toranamalai,Tenkasi.
IMPORTANCE
His contribution towards the siddha and ayurveda field cannot be explained in words.
He was also praised by the great woman saint Avvaiyar for his great works.
He got talent in all the languages.
Since he removed the insect therai from a person’s head, he is called as theraiyar.
He was considered as a siddha physician and treated lot of people.
He consumed rare herbs, in order to live a long life, to provide proper service to the people.
His works are very useful to the modern rough and tough life, and through his new invention of medicines, lot of people are benefitted.
Let us worship the great siddhar and be blessed.