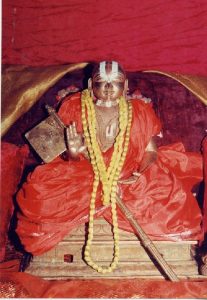 INTRODUCTION
Yamunacharya was a great vaishnava saint in Srirangam, Tamil Nadu, India. He was also known as Alavandar. He was the guru of Sri Ramanuja. He was born in 10th century AD and his grandfather was Nathamuni. Nathamuni was a great scholar and widely respected by the people for his good knowledge in all the subjects.
Alavandar was the disciple of Manakkal Nambi and learned all the divine subjects from him. He won in several debates with many great scholars, and was widely praised by the scholars and people of all regions for his great knowledge in all the subjects.
After his death, for some time, his son took charge of the Srirangam Temple, till ramanuja took possession as the chief of Srirangam Temple.
He composed commentaries on Tiruvaymozhi, Upanishads, and Bhagavad Gita.
IMPORTANT WORKS

1. Chathusloki
2. Narayana Stotraratnam
3. Siddhitrayam
4. Agama Pramanya
5. Maha Purusha Nirnayam
6. Gitartha Sangraha
7. Nityam
8. Mayavada Khandanam
IMPORTANCE
He was a great saint of srirangam, who has done his services to Sri Ranganathar in a proper manner, and the Lord himself was very much satisfied with his services. He was liked by all the people of srirangam, and especially by Sri Ramanuja, for his good qualities and for his sincere bhakti on Lord Ranganathar. He guided the people to the proper path and insisted them to worship Lord Vishnu and to chant his glories, in order to get rid of sins, and from the problems. He also cured several diseases of the people, and relieved them from mental illness, and removed the negative thoughts of the people, and made them to think about Lord Vishnu. During his administration at the Ranganatha Swamy Temple, he has done temple pujas in a proper manner, and also well maintained the temple. He also conducted several divine discourses and was listened by the people, and appreciated for his simple and attractive speech.
He was a kind, noble and a humble saint, who never got angry and showed love and affection to everyone, and never hated anybody. He also taught all the subjects to his disciples in a simplified manner, in order to easily understandable by them.