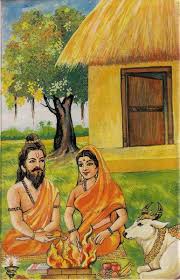 Arundhati was the wife of Sage Vasishta, one of the seven sages (Saptarshi). In spite of being the wife of one of the seven seers, Arundhati shared equal status with them. As mentioned in the Vedic and Puranic literature, Arundhati is the personification of several virtues such as devotion, chastity, and conjugal bliss. Many Sanskrit poems, written during the post-Puranic times, have depicted the character of Arundhati as ‘chaste and revered’; someone who is ‘unblemished, inspiring and worthy of imitation’. Many Hindu rituals center on Arundhati, and the most prominent amongst those is the one performed in the marriage during the Saptapadi ceremony.

According to one story, Lord Brahma created Sandhya and Manmatha as his ‘Manasika’ or mind born children. He got infatuated with Sandhya and Lord Rudra (Lord Shiva) chastised Brahma and the latter looked for an opportunity when Rudra might also be a victim of passion. However, Lord Vishnu advised Brahma against any such attempts as Rudra Deva was well known for his strong convictions.

In the meantime, being unable to bear the feeling of disgrace caused to her by Lord Brahma, Sandhya went on thousand-year hibernation under the auspices of Sage Vasishta. However, Sage Vasishta, at the instance of Lord Brahma, had appeared to Sandhya in his disguised form as a Brahman named Medatithi. Under the direction of Medatithi, Sandhya propitiated Lord Shiva for long years by reciting the holy mantra ‘Om Namo Shankaraya Namaha Om’. Despite praying for long period, when Sandhya’s prayers went unheard, she decided to end her life by jumping into the sacrificial fire (Agni kunda) of the Yagna being conducted by her mentor Medatithi. Interestingly, when Sandya was about to jump unto the fire pit, Rudra Deva appeared before her and granted her multiple boons. Delighted Sandhya asked for more than one boon and they were as follows –

Rudra Deva granted all her wishes and asked her to merge in the sacrificial fire, having in mind the image of the person she desired as her soul mate in the next birth. The Prana Vayu or the Vital Air of Sandhya’s burnt body was carried to the Solar System and Surya Deva converted it into three parts as Pratah Sandhya, Madhyahnika Sandhya and Sayah Sandhya or of the morning-noon-evening timings of a day. The Sages at the Yagna were wonder struck that Sandhya was re-born as a girl-child named Arundhati and was married to Vasishta when she came of age and became synonymous with chastity thereby earning exemplary fame.

As mentioned in Bhagavata Purana, one of the eight daughters of Kardama and Devahuti was Arundhati. She was also Sage Parashara’s grandmother and Sage Vyasa’s great-grandmother. She was then born to be the wife of Sage Vasishta. Many other Puranas have also stated Arundhati as Sage Kashyapa’s daughter, with Narada and Parvata as her brothers; it was her brother Narada who offered her in marriage with Sage Vasishta.

As mentioned by Sage Valmiki in his great epic Ramayana, Arundhati bore one hundred sons who were unfortunately cursed to be killed by Sage Vishvamitra. Later on, she bore eight more sons. Two of his sons, named Shakti and Suyagya took their formal education with Lord Rama in the hermitage of Sage Vasishta. Arundhati was like a guardian angel of Sita. She is also portrayed as the mentor of the Raghu lineage.

In the epic Mahabharata, Arundhati is given a special scholarly position as she shares equal footing with the seven sages. As per the epic, Svaha, the wife of Agni, could assume the form of the wives of all the six seers of Saptarshi mandala, except the wife of Sage Vasishta, Arundhati.

Legends associated with Arundhati are mentioned in various Hindu Scriptures. Few of them are as follows –

Bhagavata Purana and Shiva Purana – The birth episode of Arundhati is mentioned.

Ramcharitmanas (Uttara Kanda) – Brahma’s discourse, during which he gives crucial instructions to Arundhati, is mentioned here.

Valmiki’s Ramayana (Balakanda) – The enmity between Vishvamitra and Vasishta, two of the greatest sages of all times, is mentioned here. As per this legend, the rivalry leads to the death of hundred sons of Vasishta and Arundhati in the hands of Vishvamitra.

Mahabharata and several other Brahmana – Several epics also mention Shakti as the son and Parashara as the grandson of Arundhati.

Ramayana, Ramcharitmanas and Vinaya Patrika – These epics elaborate on Lord Rama and Sita’s meeting with Arundhati.

Kalidasa’s Kumarasambhava (the sixth canto) – It describes how Arundhati plays an important role in pleading Lord Shiva to marry Parvati.

Arundhati’s role in Ramayana is that of a peacemaker. When Rama was forced to abandon his devoted wife Sita, there was a strong condemnation from King Janaka against Lord Rama and his subjects. During this time, Sage Vasishta and Arundhati were the only two eligible persons who could help resolve the issue.

However, the great Vasishta was declared unfit for the task, as it was at his behest to appease the people at any cost that Rama cast out Sita. In a triangular conflict between Rama, Sita’s father Janaka, and Rama’s subjects, Arundhati – with her tact, empathy, and strength of mind – helped in bringing about a logical agreement amongst the conflicting parties.

Kamdhenu, the holy cow was in the possession of Arundhati and her husband Vasishta. She was a miraculous ‘cow of plenty’ who provided her owner whatever he desired and is often portrayed as the mother of all other cattle and also the eleven Rudras. Kamdhenu is looked upon as the source of all wealth and opulence in Hinduism. She is also revered as a Devi, the Hindu Divine Mother, and is correlated to the fertile Mother Earth, i.e. Prithvi, who is often portrayed as a cow in Sanskrit.

The story of Drought and Rain

Once there was an intense drought in the Himalayas. It did not rain for twelve years. Arundhati’s seven sons who were great sages resided in the Himalayas. They suffered immensely because there were no roots of fruits to eat.  Arundhati thought of bringing rains to the Himalayas and began intense penance for several years. Seeing this, Lord Shiva was impressed and appeared before her. Shiva granted rain which not only helped the seven sages but also every other living being.

A fast is observed by all Hindu married women whose husbands are alive. It takes place during the lunar month of Chaitra. The fast and various rituals associated with it are performed for the longevity of the husband. There is a general belief that someone near to death should not straightly look at the Arundhati star. She/he should first gaze at other brighter stars before proceeding towards Arundhati.

Arundhatīdarśananyāyaḥ (IAST: अरुन्धतीदर्शनन्यायः), – a Sanskrit maxim is used to infer ‘the unknown from that which is known’. The maxim is named after Arundhati.

In the eponymous Hindi epic poem Arundhati, the life of Arundhati is vividly described. Arundhati was composed by Jagadguru Rambhadracharya in the year 1994.