In: Astrologers
With: 0 Comments 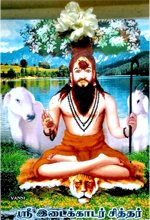 INTRODUCTION
Siddhar Idaikkadar was a great expert in the field of astrology and his writings on astrology are very useful for today’s astrologers. He was also an expert in the field of siddha. He is believed to have lived during the 3rd century BC, and he belongs to Yadava Community, and is very fond of worshipping Lord Krishna from his childhood, and praises him by singing songs on him.
He is one of the famous Siddhar among the 18 Siddhas. He was born in Idaikadu, hence he was named as idaikadar. He lived as shepherd and used to sing songs on Lord Shiva, while doing his work.In his younger age itself, he realized the inner energy in his soul, and found that god is residing within himself. He was also a great master in yoga and meditation. He was appreciated by Bogar. He served as a disciple to Bogar and learned various subjects from him.He also awakered the kundalini shakthi from him, and got the spiritual energy through that.

By seeing the sufferings of the people, he asked the people to leave the worldly pleasures and concentrate on bhakti in order to attain the siddhi.
He spent most of his life by helping the people in Thiruvannamalai region and attained jeeva samathi in Thiruvannamalai. He was also an ardent worshipper of Lord Arunachala.
His most important contributions are:
1. Arrangement of Navagraha in temples in a proper manner.
2. Introduction of Kayakalpa Medicine
He was praised by the people, since people were believed that he contained the power of Lord Shiva and Krishna.
He frequently utters the shiva mantra “Om nama shivaaya!” and asked the people to repeatedly chant it in order to remove the burdens in their life.
FAMOUS WORKS
1. Idaikadar Gnyana Soothram 70
2. Idaikadar Kanida Nool
IMPORTANCE
He was a great siddha who contained yogic powers, and through his power, people were treated him as god, and worshipped him. During his period, he has done lot of good things to the people. He cured various dreaded diseases of the people, and cleared their mind, by removing bad thoughts in their mind, and guided them to the spiritual path through his great divine powers.

Let us worship the great siddha and be blessed.