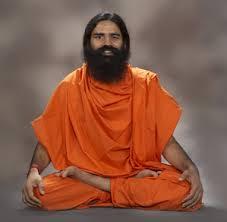 Sri Baba Ramdev is well known for teaching people the Art of Breath Control i.e. Pranayam. With this Yoga practice, he has set out a new renaissance of holistic healing in India and across the world. He first came into limelight when he started the Divya Yog Mandir Trust in collaboration with Acharya Karamveer and Acharya Balkrishna. In 2003, Aastha TV began broadcasting Ramdev in its morning Yoga slot. Soon after broadcast, he became a well known face in India.

Today, Ramdev’s decade old movement called ‘Pranayam’ bears a major impact on the lifestyle of people, who have eventually become his ardent followers. One can say that, the entire nation has got carried away with the Pranayams taught by Swami Ramdev, who claims to cure even deadly diseases like AIDS and Cancer with his breathing techniques.

Along with disseminating Yoga and Spiritual practices, Ramdev owns an institution, Patanjali Yog Peeth, which offers everything related to the practice of Ayurveda – the ancient Indian system of holistic healing.

Sri Swami Ramdev ji was born in the Mahendragarh district of the Indian state of Haryana in an impoverished family. His father’s name was Shri Ramniwas Yadav ji, a farmer, and his mother was Srimati Gulab Devi. Ramdev suffered from paralysis during his childhood. He once stated on air that it was through Yoga that he was able to regain the full functionality of his body.

He attended school till the Eighth standard in Shahbajpur. He then joined an Aarsh Gurukul Kalva in Khanpur village to study Sanskrit and Yoga.

Guru of the Guru

He was taught there by Acharya Shri Pradyuman ji. Eventually, he assumed Sanyasa and resorted to a monastic living, assuming his present name. He then proceeded towards Jind district, joined the Aarsh Gurukul Kalva and began providing free Yoga training to the denizens of Haryana. At Gurukul kalva, he was trained by his grandmaster, Acharya Shri Baldev Ji maharaj.

He is one of the founders of the Divya Yog Mandir Trust headquartered in Haridwar, which aims to popularize Yoga and offers Ayurvedic treatments. The New York Times calls him an “Indian who built Yoga Empire’, “a product and symbol of the New India, a yogic fusion of Richard Simmons, Dr. Oz and Oprah Winfrey, irrepressible and bursting with Vedic wisdom”.

His camps are attended by a large number of people. Over 85 million people follow his Yoga camps via TV channels and video. His Yoga teaching sessions are conducted for the masses and are free of cost. His stated rationale in life is to be selfless and be of help to everyone.

Patanjali Yog Peeth is an Institution for research and treatment in Ayurveda and Yoga established by Swami Ramdev in Haridwar.

By the grace of God, Ramdev took up a divine resolution to set up a grand Institution with world’s biggest O. P. D. (of six to ten thousand patients per day), an I. P. D., and a vast Pathological Laboratory (for research Yoga and Ayurveda), on the Delhi-Haridwar National Highway, near Bahadrabad in Haridwar, the holy land of saints and sages with the joint efforts of countrymen.

Ramdev has unfolded several confusing aspects of ancient Indian scriptures such as Ashtadhyayi, Mahabhashya and Upanishads. He has also propagated the teachings of the six systems of Indian Philosophy in various Gurukuls. He has helped establish Gurukuls in Kishangarh, Ghashera, and Mahendragarh in India.

His educational show is broadcast on the religious TV channel Aastha, as well as shows on Zee network, Sahara One and India TV. He has been regularly conducting Yoga camps all over India and abroad.

There was a general belief any deviation from the practicing techniques could immensely harm a person. This led to an idea amongst the commoners that practicing Pranayam is not possible without the direction and vigil of a Yoga Guru. Such false notions hampered the growth of Pranayam as a standard health exercise that should be practiced on a daily basis.

No one dared to practice an art which would cause harm to them if there is even the slightest of deviation in the technique. Ramdev has completely changed the age old beliefs related to practicing Yoga. He has devised very simple techniques for practicing different forms of Pranayam which can be easily learned by any commoner just by following the T.V. As per the assurance given by this great Yog master, Pranayam can never harm anyone who attempts to practice its various techniques individually.

The Pranayam as taught by Swami Ramdev consists of the following eight breathing exercises in sequence:-

In addition, he also advises Agnisaar after Kapal Bhati Pranayam to all, particularly to those who are incapable of doing Bahaya Pranayam because of poor health conditions.

Ramdev’s Yog science camp has begun a health revolution in India and abroad. The year 2006 officially launched Baba Ramdev on an international platform when he went to London and taught Pranayam and Yoga on the foreign land for almost a month.

Swami Ramdev was awarded an Honorary Doctorate degree by KIIT University (Science and Technology Institute) for his contribution in the field of Yoga and Vedic Science. In January 2007, he was awarded a Doctorate during a ceremonial event at the institute presided over by the Nobel laureate, Richard Ernst.

More than a Yog Guru, Swami Ramdev in the last couple of years has emerged himself as a revolutionary face of liberal India. However, Ramdev has elucidated that he has no political ambitions, but feels it is his obligatory duty to reform social and political loopholes besides disseminating Yoga and spiritual health practices.