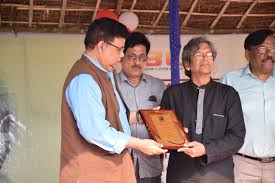 His inimitable skills and knowledge on the subject – acquired through years of recitation – has molded his individuality to a remarkable level, attracting a large number of followings. All these years, Thakur has showed the courage of sticking to his peerless yet contradictory ways of teaching which reflect his philosophy of life.

After years of longing for a child, Bharat Thakur was born to his parents with the blessings of Guru Sukhdev Brahmachari – a Sufi fakir. Following Thakur, her mother bore three more children, but the birth of Thakur always held special significance in his parents’ lives. The parents also agreed upon sending their eldest child with the Guru to the Himalayas. Thus, at the tender age of four, Thakur left for Himalayas along with Guru Sukhdev Brahmachari and stayed amid the snow-capped mountains for the next ten years.

Eventually, the influence of yog and meditation became such in Thakur’s life that he decided on becoming a Spiritual Master for imparting his alternative healing skills to others. However, he finished his education after returning from the Himalayas. He obtained his graduation and Post-graduation Degrees in Exercise Physiology and Yoga from the Lakshmibai National College of Physical Education, in Gwalior.

Books authored by Bharat Thakur are as follows –

Ø  He is also the composer of a collection of the poetry, Truth: the Art of the Mystics.

The Genesis of Artistic Yoga

How did Thakur conceive the idea of Artistic Yoga?

Upon returning from the Himalayas, Bharat Thakur was baffled to find out the shallow and weird Yoga learning techniques prevalent around him. He further unearthed that the 5000-year old science of Yoga – a part of Indian heritage, had just been reduced to few aimless asanas without much health benefit. He witnessed people who were practicing Yoga since years, but were still overweight, lacking stamina and luster.

Bharat Thakur thus established his own Yoga centre named Artistic Yoga in 1999 to bring his idea of practicing Yoga into shape. The enthusiasts of Bharat Thakur firmly believe that with Artistic Yoga Thakur has brought back the dynamism and exuberance with which the true Yoga should be practiced, as taught by our ancient Yog gurus. He has saved the authenticity of Yoga which was lost amid false spirituality dwelling on various fusions, pointless chanting etc.

Bharat Thakur established Artistic Yoga with a vision which was crisp and clear. He wanted to help his pupils to first get in shape, become disease-free and thereafter proceed towards higher practices of Yoga, similar to Patanjali’s Ashthanga Yog.

Artistic Yoga specifically adapts ancient Yoga methods and postures which are suitable and effective for the modern lifestyle. This kind of Yoga works on optimum utilization and improvisation of five physical factors – strength, flexibility, stamina, balance and agility. The goal is achieved through various ancient yogic techniques including bandhas, kriyas, asanas, and pranayama.

The Artistic Yoga focuses on alternative holistic healing through mind-body-spirit purification. Along with a healthy physique, this Yoga gives tremendous stress on rejuvenation of one’s mind and spirit (soul).

Some of the physical aspects which Artistic Yoga specifically concentrates on are weight loss, gastric relief, stress relief, alleviation of backache and body toning. In India, the Artistic Yoga is taught in Delhi, Mumbai, Bangalore, Chennai, Hyderabad, and internationally in Dubai, Sharjah and Russia.

In the Words of Thakur

This is what the man himself was quoted as saying about his vision of Yoga practice in India. “Yoga is not big in India. While 22 per cent of America practices Yoga, in India only 0.0001 per cent has incorporated it into their lifestyle. Other than my school, there is no other Yoga school to date that’s a chain across India. But you do have Airtel everywhere!”

“… It’s an entire process to live the Yoga lifestyle. One needs to know if they want to imbibe Yoga as Time magazine popularizes it as the best bet to have a toned behind, or practice Yoga as Buddha it, which is to experience bliss of the other realm,” he elucidates.

While differentiating between physical exercise and spiritual pursuit he explains, “That’s one reason why it’s alright for a yogi to have a pot belly. I always questioned them till they answered that the physical shape of the body doesn’t matter when you’ve already experienced the other world. Their purpose is not to get in shape,”

One on One with Thakur

Bharat Thakur’s Message and Philosophy can best be understood by this Q and A Conversation with him:

Ø  The beauty of Bharat Thakur is that he simply refuses to be put into a box. For a spiritual master to develop a form of Yoga that believes as much in weight loss as it does in meditation is confusing. Does one have to have a six-pack in order to reach enlightenment?

“I don’t see the problem. Can a man with a headache or backache sit for meditation? Impossible, He will only think about the part of his body aching. The art of Yoga is to make the whole body invisible. By invisible I mean that you should not be able to feel it. If you can feel a joint or an organ or your head it means you have a problem. If you can’t feel your knee or neck it means it is perfect. To enter into silence, the body should be free of disease. And that includes obesity.”

Ø  Shouldn’t we go beyond the body in order to access something more?

“Sure. A headache is an equally good meditation if that is the route you wish to take. Meditation is simply the art of becoming one with the object of your focus. It can be anything. If you can become one with your headache or backache, it is equally good (sometimes that is the only option available). But if possible try to take an easier path!”

Ø  How do you so easily embrace the material aspects of life and still speak about meditation and spirituality with such conviction?

“There is no how. It’s a matter of understanding. This world that we live in is material isn’t it? It isn’t virtual, like the internet. If I slap you, you will feel pain. If you eat chocolate won’t you feel pleasure? How can you deny such an essential part of life and claim it to be spiritual? It’s a misunderstanding that has existed for centuries. Yoga and meditation is about awareness, silence and being a witness onto yourself, whether you are in pain or in pleasure, whether you are broke or rich today. Whether you are lonely or are enjoying yourself at a party. Only witnessing is important, nothing else. I want to show to people that being normal is a good thing. You can still be aware. You can still reach a state of bliss in exactly the situation in which you are. Nothing needs to change externally. You don’t have to leave your wife and go to the Himalayas.”

Ø  If just witnessing is important, why should we try to attempt anything or succeed in any way? Why not just witness?

“Then the whole world would be sitting and doing nothing! You have to be productive in life, in any way. It is essential. It is part of accepting that you have been given two hands and two legs and a brain which has got certain talents and abilities. The goal is not to stop all action. The goal is not to give up ambition. The idea is to live exactly as if there is nothing else but this material world and what it offers, but remain a witness to all what you do.”

Ø  And where will that get me? Doesn’t sound interesting at all!

“All this pain, greed, suffering around you ,the sleepless nights , the stress, the anger and frustration, around you and inside you, if that is more interesting to you, nobody can stop you from experiencing it. The choice remains yours. I am not a preacher.”

Ø  Then who are you?

“I’m just a catalyst for your own experience. I give you tools, techniques, a seed of awareness. You create your own path. Always live life according to yourself. My job is done.”

Message:  “I don’t believe in arguments. They are a waste of time. I prefer method. Method is something you cannot think about or discuss. It will prove itself in a certain span of time. The right method makes things happen.”

(From Malviyanagarflyovers take a right, opposite golden dragon hotel which connects the S block)