In: Buddhist Monks, Gurus
With: 0 Comments 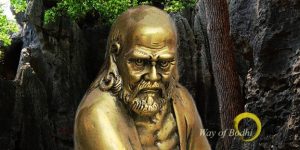 INTRODUCTION
Bodhidharma was a Buddhist monk who lived during the 5th century. He is considered to be the main person who had spread the principles of buddhism to China. He well trained the buddhist monks of Shaolin Monastery in the art of kungfu.
He was an expert in all kinds of martial arts.
In Japan, he was called as Daruma.
LIFE
According to Chinese sources, Bodhidharma came from india to china. He was the third son of a popular Indian king.
Bodhidharma’s teachings are mainly based on the teachings of Lord Buddha. He also contains the features of Lord Buddha, and mainly focussed his attention on doing meditation and teaching martial arts to his chinese disciples.
Bodhidharma, died at the banks of the Luo River,China, where he was buried by his disciple in a cave.
FAMOUS QUOTES
1. No one can reach the top without the help of the guru.
2. Pacify your mind by doing meditation.
3. Follow the principles of Buddhism, and act accordingly.
4. Apply your mind, before starting any new task, and think several times, before doing the work.
5. Learning martial arts will give confidence in your life and can be protected from your enemies.
6. Don’t cause any harm to others, always keep your mind pure and calm.
7. Always go through the path of righteousness.
8. Do good things to others, since it will bring happiness to us.
9. Try to avoid too much of worldly pleasures in the life, since it will not last long in your life.
IMPORTANCE
He was a great spiritual master, who was expert in all kinds of art, and also a great yogi, contains spiritual powers. He is still remembered for his good teachings and for living a noble life in this world. He was a pious and a humble scholar who treated everyone with great respect and does not differentiated anyone with regard to caste, gender and religion. He shared his great knowledge to others without any pride in his mind. He is also regarded as a divine incarnation of Lord Buddha, through his great spiritual knowledge, super natural power, wisdom, courage and boldness.

Let us worship this great man and be blessed.